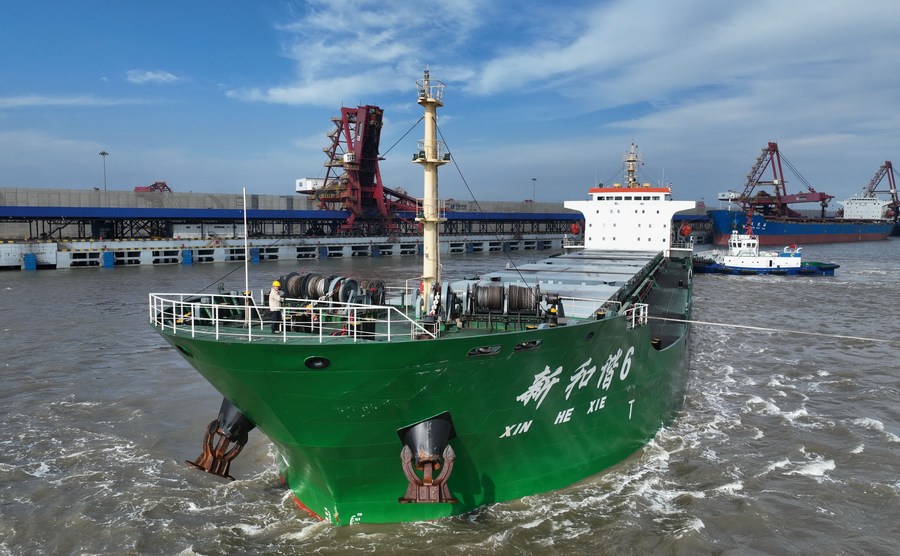 Photo taken on July 18, 2022 shows a ship departing from the coal wharf of the Caofeidian Port area of the Tangshan Port in north China's Hebei Province. (Photo： Xinhua)

PCTC is a special transport ship with new high technology and high added value developing with the rise of the automobile trade.

Driven by the booming auto trade and the increasing demand for transport, orders for PCTCs are on the rise. According to the report, from 2016 to 2021, only 12 new ships were ordered in the global PCTC new ship market, however, in 2021, the total number of such ships in the orders in force recorded 38, and in the first three quarters of 2022, 82 such ships were ordered in the global new ship market.

The industry insiders expect that from 2024 to 2030, the demand for new PCTCsin the global market will reach about 200.

In the face of the demand for clean fuel in the shipping industry, SDARI also independently developed and designed China's first ammonia fuel-powered PCTC with 7,000 parking spaces.

The institute is also intensively developing methanol fuel-powered PCTCs, and is committed to contributing more innovative solutions to the low-carbon development of the global auto transport and shipping industry.