As the development of short video platforms such as Douyin and Kuaishou accelerates, the number of short video users in China has reached 818 million, accounting for 87 percent of the total Internet users, with the average daily use time reaching 110 minutes, according to a recent report. 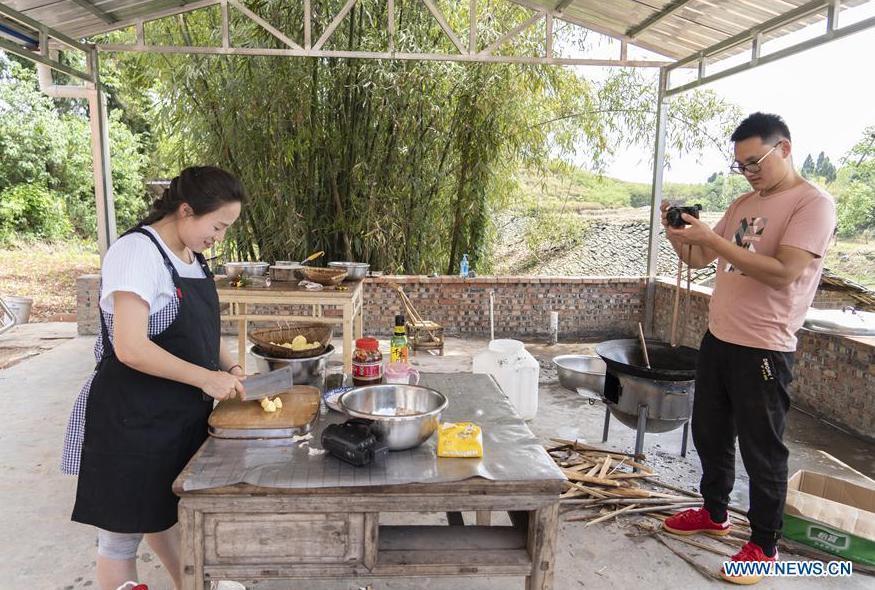 Zhou Xiaolong shoots a video for his wife Xu Yan in Baihua Town, Yibin City of southwest China's Sichuan Province, April 27, 2020. Zhou Xiaolong and his wife Xu Yan, who used to work in different cities, now live in the countryside and run a live streaming account with more than 3 million followers. (Photo: Xinhua)

According to the 2020 research report on the development of Internet audio-visual programs in China released by the China Netcasting Services Association (CNSA), as of June 2020 the number of Chinese netizens has expanded to 940 million, with short videos becoming the first choice for more and more netizens to obtain information.

The report shows that as of June 2020, the number of Internet audio-visual users in China had reached 901 million, an increase of 43.8 million over March 2020, with the utilization rate of Internet users at 95.8 percent, and the average daily use time at 110 minutes.

With regard to the rapid growth of short videos, Zhou Jie, executive deputy secretary general of the CNSA, said that the current development trend of short videos is very strong, and among the entire network audio-visual services, short video applications have the highest per capita one-day use time and the highest customer loyalty.

Short videos continue to infiltrate into e-commerce, tourism, education, live-streaming and other fields, promoting multi-dimensional changes in the market pattern.

"Short videos are no longer just about entertainment; they have been infiltrated into various fields, which will have an impact not only on the entire audio-visual industry but on the national economy as well," Zhou Jie said.

According to the report, short videos accounted for the highest share of the market in the online audio-visual industry in 2019, reaching 130.24 billion yuan (about 19.48 billion dollars), an increase of 178.8 percent over the same period last year.

It can be seen that short videos not only have a strong ability to make money, but also have a more significant trend of integration with other industries, especially in promoting the development of tourism.

Statistics show that in 2018, videos related to Hongyadong, a popular tourist site in Chongqing went viral on a short video platform named Douyin. Subsequently, 140,000 visitors were attracted to this tourist attraction during the 2018 May Day holiday, an increase of 120 percent over the same period of 2017.

Meanwhile, the number of visitors to Hongyadong reached 140,000 on just the first day of the 2020 National Day holiday.