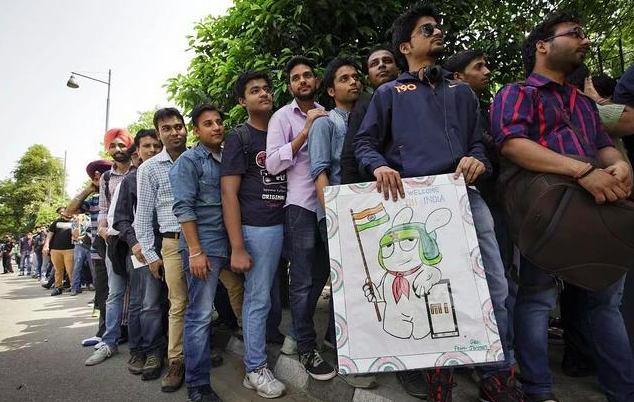 Chinese smartphone brands are the biggest winners in India's October holiday sale, beating foreign rivals and lifting the world's second-largest smartphone market to record sales, despite reported calls among some Indian officials to put restrictions on Chinese telecom firms' operations in the country due to security concerns.

The win for Chinese vendors in the ongoing online shopping spree in India also points to the strengthening Chinese smartphone industry and offers a unique experience for them to increase their footprint in more overseas markets, analysts noted.

Chinese smartphone brands such as Xiaomi, OnePlus and Huawei's Honor are driving sales for one of the biggest online sales seasons in India, which kicked off on Wednesday, according to latest data from Hong Kong-based Counterpoint Research.

Chinese vendors could account for 70 percent of total smartphone sales during the sales event, which is expected to reach a new record of $1 billion, the data showed.

James Yan, research director at Hong Kong-headquartered Counterpoint Research, said that the domination by Chinese brands in the Indian smartphone market stems from a robust domestic supply chain that puts other players at a disadvantage.

"The Chinese smartphone supply chain is very mature… Chinese companies are very strong in many areas, from supply to research and development," Yan told the Global Times on Monday, adding that Indian consumers are still keen on more affordable smartphones rather than high-end devices.

"I think only Chinese companies could produce extremely cost-effective smartphones, which are perfect for the Indian market," said Hu Tu, secretary general of the Bangalore Chinese Chamber of Commerce.

He told the Global Times that Chinese vendors have also adopted very effective marketing strategies in India and invested big money in building up brand awareness in the country.

Chinese companies' sales success in the Indian market also offers a great lesson for reaching out to more overseas markets, Yan added. "Chinese vendors' strategies in India have been proven very effective, and they can copy these strategies and use them in other markets," he said.

Though demand is the chief factor in the sales success of Chinese smartphones, warming relations between China and India have "definitely" helped, Hu added, noting the overall business environment for Chinese companies and products has improved.

The two Asian neighbors have had strained relations at times, but things took a positive turn after the leaders of the two countries met in Wuhan in Central China's Hubei Province in April.

Still, there are some media reports that suggest Indian officials might follow the lead of the US and Australia in restricting business operations of Chinese telecom giants Huawei and ZTE.

In September, India's Economic Times reported that Huawei and ZTE were left out in the Indian official list of companies for trials to develop 5G networks. Huawei later denied the reported ban, saying the company is an active participant in India's growing 5G development, according to ZDNet.

Yan said that such a ban, even if it were true, would only have a minimum impact on sales of smartphones. "Sales of smartphones depend more on demand. For consumer electronics, I think the impact is limited," he said.

Analysts also noted that if the Indian government moves to ban Huawei and ZTE, which have become main players in the 5G rollout globally, it could also hurt domestic 5G development and eventually consumers.