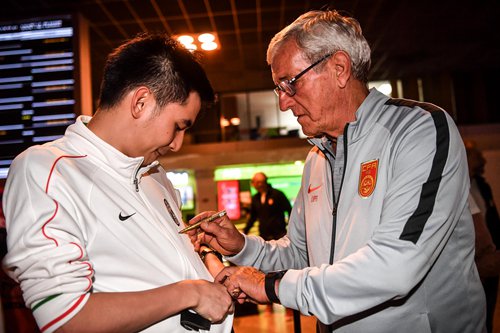 Ever since the FIFA World Cup kicked off last month, Chinese soccer fans have been ridiculing their men's national team for their failure to qualify in the tournament. Now it seems they've turned on Marcello Lippi, current manager of the China national team, after reports revealing he is among the highest paid in the world went viral on social media.The Italian soccer legend earns $28.1 million a year heading the China national team, a salary second only to Manchester United's Jose Mourinho, according to the Hong Kong-based South China Morning Post in April.For comparison, Germany's Joachim Low was the highest-paid coach at the ongoing Russia World Cup at 3.85 million euros ($4.52 million) - a sixth of Lippi's salary, according to the football2018worldcup.com. "Let's be honest and say that Lippi is clearly overpaid. It doesn't seem to make a difference who leads China's lousy soccer team, me or someone with experience," wrote one Sina Weibo user. Net users pointed out that Lippi's pay is twice the combined salaries of coaches of eight top-performing 2018 World Cup teams - Uruguay, France, Brazil, Belgium, Russia, Croatia, Sweden, and England.However, some expressed sympathy for Lippi at the expense of the Chinese team. "It will never be enough to make up for his tarnished reputation for being associated with the Chinese team late in his career," wrote another.Some jabbed that Lippi's salary was appropriate for the job. "Lippi is obviously suffering much more than the top eight World Cup team coaches," wrote a Net user. "He's fairly compensated considering that coaching the Chinese men's team is the toughest job out of all of them," wrote another. Netizens made sure to get a few extra kicks in about the national team players' salaries.Soccer fans also pointed out that China's national team players earn a total of 13.18 million euros a year, while the Panama national team - which appeared in the tournament - earns 9.43 million."Panama went to Russia while China watched them at home this summer," wrote a netizen.