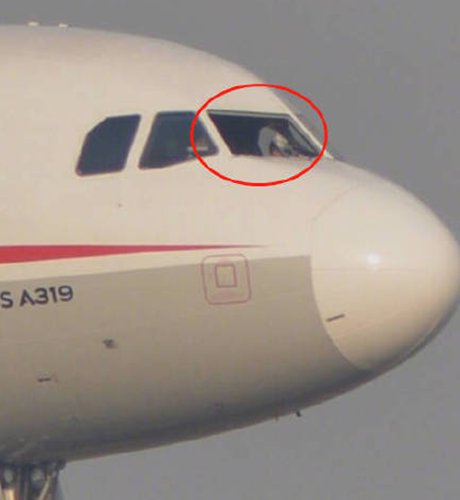 Pictured is the plane with a missing windshield panel. (Photo: Sina Weibo)

Chinese social media praised a pilot as an "epic hero" after safely landing a plane carrying 119 passengers after one of its windshield panels blew out over Southwest China.

Sichuan Airlines flight 3U8633 from Chongqing made an emergency landing at Chengdu Shuangliu International Airport at around 7:40 am on Tuesday.

Captain Liu Chuanjian managed to keep his cool as - 40 C winds blasted through the plane's opening at around 9,750 meters.

The incident happened without any signs, and half of the co-pilot's body was outside the plane due to the sudden change in cabin pressure, Chengdu Business Daily newspaper reported.

The sudden change in cabin pressure was very uncomfortable, Liu told the newspaper, comparing the experience to driving at 200 kilometers per hour at the temperature of -5 C.

"It happened as the flight attendants were serving our meals. People were shocked," a passenger on board the Lhasa-bound flight told media.

There was a feeling of weightlessness, the passenger said, adding many cried and vomited.

This is the first such case in China, as the captain had to simultaneously battle through huge noise, equipment malfunction and a change in cabin pressure, Wang Ya'nan, deputy editor of Aerospace Knowledge magazine, told the Global Times.

The safe landing was a miracle as the captain showed remarkable operation capability and sound psychological quality, said Wang.

The captain said it only took 20 minutes to land following the incident.

Nine crew members were also on the plane.

Reports said the 119 passengers came out of the ordeal unscathed, while the co-pilot and a flight attendant were treated for minor injuries.

Miraculously, Liu was not visibly injured. 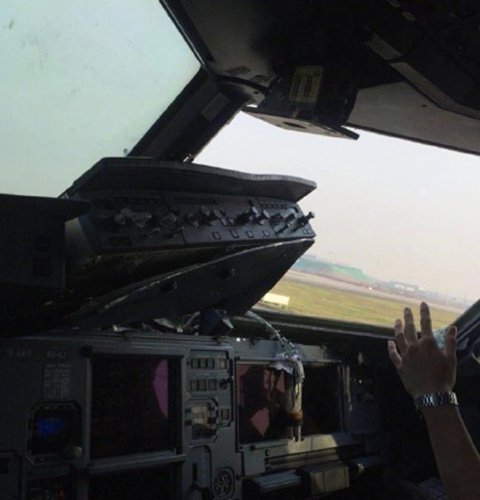 Pictured is a view from the cockpit. (Photo: Sina Weibo)

Liu, who had served in the military before joining Sichuan Airlines in 2006, is now being hailed as a hero on Chinese social media.

The glass incident occurred in the pilot's cabin, which makes the landing more difficult as the strong airflow, which could hit 500 kilometers per hour, comes directly at the pilots, who could not even stand properly and hear each other's voice, said Wang.

The captain could not land the airplane the moment the incident occurred as they were flying over the Qinghai-Tibet Plateau, Wang noted.

"I've got to say, this captain is awesome! This is what heroes are made of! He saved a plane full of lives," said Sina Weibo user "youfanlideyouhuijuan."

Apart from mounting praise, many expressed concern about the cause of the incident.

"Whether the plane has been properly maintained should be investigated and the airlines should treat the incident as a warning, instead of being immersed in the caption's epic landing," wrote Weibo user "tudouyikouchiyige."

The sudden shattering of the glass is still being investigated, and Airbus China is sending a group of technicians to support the investigation, sina.com reported.

The accident might have been caused by the use of poor screws, heating problems or a collision with birds, Chen Jianguo, an experienced captain, was quoted as saying by news site sina.com.