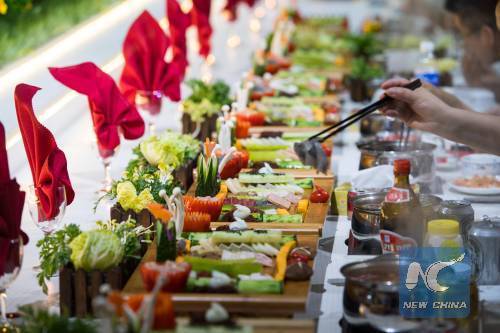 China' s catering market was flourishing in 2017 with its overall revenues exceeding 3.9 trillion yuan (603.6 billion USD). With huge 10% increase on 2016, the question has to be asked: where are Chinese people spending all this money? The answers can be found in a report recently released by the China Cuisine Association.

Predictably, Chinese cuisine came out on top, dominating the market with a 57 percent share, and Sichuan' s world-famous hot-pot was the most popular style. But Western, Japanese and Korean cuisine were not left behind, also seeing increasing demand.

Millennials contributed to over 50 percent of the food and beverage revenues, according to the report. It seems the younger generations have quite the sweet tooth, preferring cakes and desserts over traditional Chinese food.

The report also notes that 19.2 percent of customers think the atmosphere is the most important factor for choosing a restaurant, while 17.8 percent care more about the way that the food tastes. Salty and fresh flavors are favored by many customers.

The food delivery market continued to boom in 2017 with its value exceeding 200 billion yuan (31 billion USD). One man in east China's Zhejiang Province ordered takeaway food 1,639 times last year, and a delivery worker in NE China's Heilongjiang Province said he could deliver up to 75 meals in just one day.