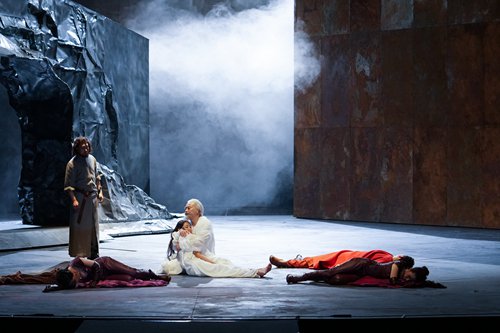 A scene from the Chinese adaptation of King Lear Photo: Courtesy of Wang Xiaojing

Roaring "Blow, winds, and crack your cheeks! " in Putonghua (Standard Chinese), the main character in the Chinese adaptation of King Lear that recently returned to Beijing's National Centre of Performing Arts (NCPA) seems much approachable to local audiences than the English-speaking one in William Shakespeare's original play.The grumpy, arrogant king in the late British playwright's classic tragedy set in 8th-century Britain has been a "dream role," veteran Chinese actor Pu Cunxin told the Global Times on January 17 after a rehearsal for the play."The most challenging part for me is definitely when King Lear goes half-mad: He is half-mad but he is uttering something that makes sense… I had to figure out why he was acting like this before performing the scene," said Pu, who had his hair dyed gray days ago to help him "get into the role."Directed by Chinese stage director Li Liuyi, the five-act performance is a co-production by the NCPA and the director's studio. The play is being staged for a second time at the NCPA from January 20 to Sunday, a year after its sold-out premiere in 2017. The show has been a big hit, nearly 90 percent of tickets were sold three days before the show, according to NCPA data."Classic," "great performance" and "great stage design" are some of the most common descriptors used by Chinese audiences in their reviews of the play on Sina Weibo. Cross-border cooperation"This is one of the few King Lear theater adaptations that have been staged in the Chinese mainland in the past three decades," Li said.Li recalled two other King Lear stage adaptations in the Chinese mainland - one by The Central Academy of Drama in 1986 that moved the setting to ancient China and another staged that same year by the Liaoning People's Art Theater and starring Chinese artist Li Moran as the king.Different from the two other King Lear adaptations, the script that Li used was translated from the version used by the Royal Shakespeare Company (RSC). Based in Stratford-upon-Avon, Shakespeare's birthplace, the troupe is one of the most prestigious theater companies in Britain. The Chinese director explained he went to great pains to try make the language more "dramatic" in Chinese. "The language in the first translated draft was beautiful and poetic, but it is still a bit awkward for a drama performance so I made some changes," Li said.Moreover, the Chinese King Lear cast worked closely with the RSC. Some of the lead members of the Chinese cast flew to Britain in 2016 to watch a RSC Shakespeare performance, while later that year the NCPA flew RSC members to China so they could help King Lear actors and actresses work on their lines. "We learned a lot from our British counterparts and the trip helped improve our performance in terms of the rhythms of the lines," Li said.In 2017, RSC director Gregory Doran even came to Beijing to watch the play's NCPA debut."I was told that Doran found my acting as King Lear convincing," Pu told the Global Times. With Oscar-winning Emi Wada from Japan as costume designer and Michael Simon from Germany as one of its set designers, the play was able to demonstrate a special poetic aesthetic by bringing in experienced international experts.Wada, for instance, previously designed costumes for Akira Kurosawa's Ran, a Japanese film adaptation of King Lear."We worked well together because we shared similar aesthetic values," Li noted.Down-to-earth Best known for his Chinese adaptations of the ancient Greek tragedy Oedipus the King and an innovative Sichuan-dialect version of the Beijing People's Art Theater stage classic Teahouse, Li incorporated some avant-garde design into his King Learadaptation by having the character of Edgar speak in the Shandong dialect during the part of the story when the character tries to hide his identity from his blinded father."I think it is a good experiment, as in the original script, the role's lines before and after the scene are also written in two styles specifically to let the audience discern Edgar's changes," Li said.While many Chinese might find English performances of Shakespeare a bit hard to understand since they were written in Early Modern English, Li said he never felt that Shakespeare's works were lofty or untouchable."Quite the opposite, I think his works are very down-to-earth and at the same time full of philosophical wisdom - this is also what I want to show to Chinese audiences via King Lear," Li noted.This is not the first time a Shakespeare classic has been localized in the Chinese mainland. The past decade has seen quite a number of theater or movie productions based on or inspired by Shakespeare's stories, such as a 2017 NCPA theater adaptation of The Merchant of Venice and Feng Xiaogang's 2006 movie The Banquet, which was inspired by Hamlet."These productions did help to promote Shakespeare in China," Li said. "But I think I had a different mindset when adapting King Lear -I never regard Shakespeare and his story as a Western one, I think it is actually an Eastern story."