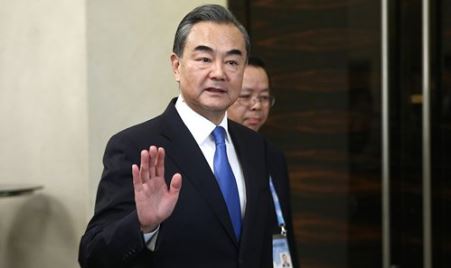 Chinese State Councilor and Foreign Minister Wang Yi on Saturday called for the building of East Asia economic community and an open world economy. Wang made the call here at the foreign ministers' meeting of the 10 member states of the Association of Southeast Asian Nations (ASEAN) and China, Japan and South Korea (10+3). Currently, with twists and turns in economic globalization and surge of unilateralism and protectionism, the international order and multilateral trade system have been adversely affected, Wang said. He called on the 10+3 countries to demonstrate strong will to promote free trade and firm resolution to uphold multilateralism, firmly push forward regional economic integration and build an East Asia economic community as well as an open world economy. Such efforts will provide more stability and certainty to the world economy, the top Chinese diplomat stressed. Wang also called for substantive progress to be made in the negotiations on the Regional Comprehensive Economic Partnership (RCEP) by the year-end and an East Asian pattern of development to be forged, which is free, balanced, inclusive and beneficial to all. The 10+3 countries should also deepen financial cooperation, continue to improve regional financial security network, make good use of the Asian Infrastructure Investment Bank and the Asian Development Bank so as to lend more cost-effective financial support to countries in the region, he said. The 10+3 countries should expand sectors of cooperation, including boosting cooperation on innovation and pressing for new cooperation in the fields of digital economy, smart city, artificial intelligence and e-commerce among others, Wang said. Noting that the 10+3 should also build new platforms for people-to-people exchanges, Wang said China proposes to set up a "10+3 cultural cities network," enhance the capability building of the think-tanks network in East Asia, and promote cultural ties and people's friendship among East Asian countries. Foreign ministers from Japan, South Korea and ASEAN member states all spoke highly of the fruitful achievements of cooperation scored within the framework of the"10+3" and affirmed the positive role the "10+3" has played in promoting regional peace, stability and prosperity. They all shared the view that faced with the shock and threat to the multilateral trade system brought by unilateral protectionism, it is more important than ever to enhance the cooperation of the "10+3". They agreed that the "10+3" should consolidate unity, firmly support free trade, oppose protectionism, speed up the negotiations on RCEP and push forward the building of East Asia economic community and maintain peace and prosperity in East Asia.