HANGZHOU, Feb. 27 (Xinhua) - Chinese State Councilor and Foreign Minister Wang Yi said Wednesday that China appreciated the unremitting efforts of the Democratic People's Republic of Korea (DPRK) and the United States to promote the political settlement of the nuclear issue on the Korean Peninsula. 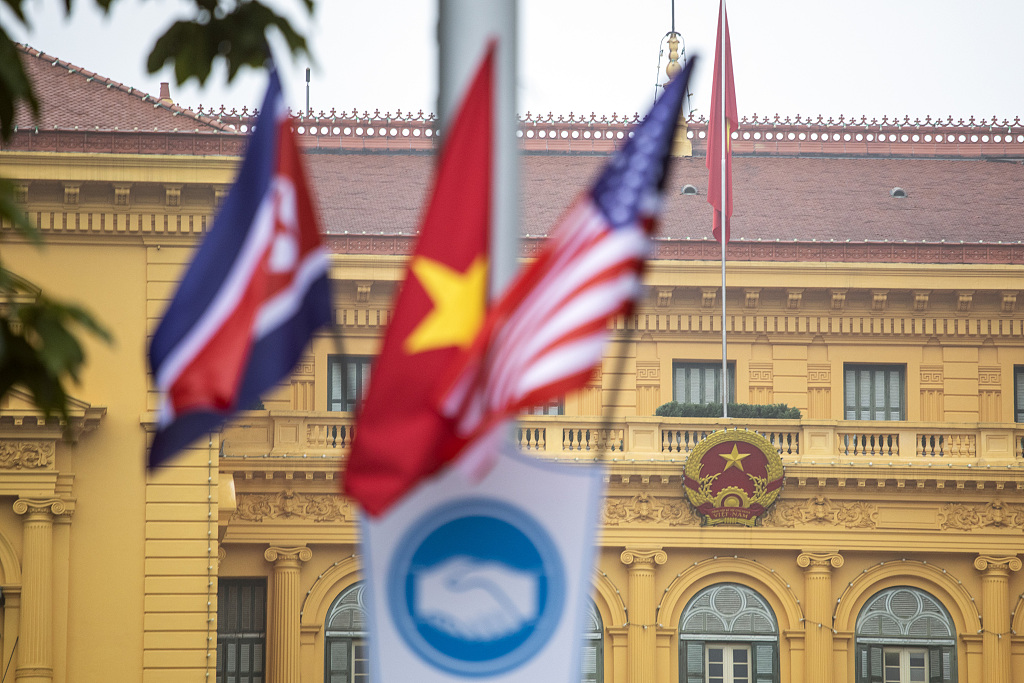 The flags of North Korea, from left, Vietnam and the United States fly outside the Presidential Palace in Hanoi, Vietnam, on Wednesday, Feb. 27, 2019. (Photo: VCG)

After the meeting of the foreign ministers of China, Russia and India held in Wuzhen of eastern China's Zhejiang Province, Wang told the press that the upcoming summit between DPRK's top leader Kim Jong Un and US President Donald Trump would mark a major event in the DPRK-US relationship and draw the world's attention.

He said the "double suspension" was realized on the peninsula since the first DPRK-US summit held in Singapore in June last year, and China expected the upcoming summit in Hanoi, capital of Vietnam, would mark an important step in promoting the denuclearization and building the peace mechanism on the peninsula by using the dual-track approach.

"We hope both the DPRK and the United States can show sincerity, release goodwill, clear up contradictions and foster trust," Wang said.

He said China would continue to safeguard the peace and stability on the peninsula, promote dialogues and peace talks, and contribute to long-term stability.

China, Russia, India and the international community would also make their respective contributions to promoting the proper resolution of the nuclear issue on the Korean Peninsula, Wang said.