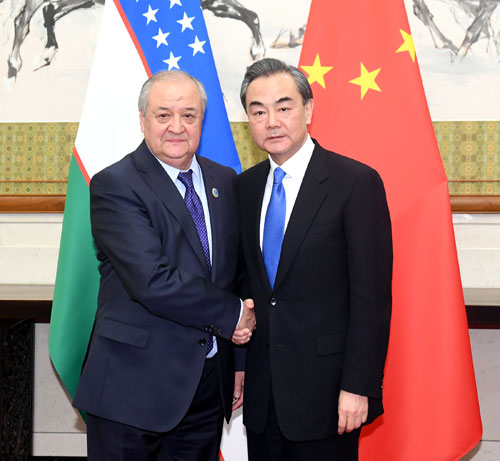 Wang noted that China-Uzbekistan relations have achieved leapfrog development under the strategic leadership and the promotion of the two heads of state in recent years.

China appreciated a constructive plan to strengthen cooperation on the joint construction of the Belt and Road Initiative (BRI), proposed by Uzbek President Shavkat Mirziyoyev at the second Belt and Road Forum for International Cooperation (BRF) held in Beijing last month.

Wang said that China is willing to dovetail the BRI with Uzbekistan's national development strategy, strengthen cooperation in areas of trade, agriculture, production capacity and others, strengthen bilateral ties, and contribute to promote regional peace and development.

He stressed that China is willing to enhance coordination with Uzbekistan with the aim of boosting the SCO's role in the promotion of regional economic integration, and jointly oppose unilateralism and protectionism.

For his part, Kamilov said President Mirziyoyev held a fruitful meeting with Chinese President Xi Jinping at the BRF.

The Uzbek side thereafter assigned certain institutions and officials to implement the outcomes of the forum, and accelerated the process of jointly building the Belt and Road.

He noted that Uzbekistan firmly adheres to the one-China policy and understands and supports China's anti-extremist measures in its Xinjiang Uygur Autonomous Region.

He added that Uzbekistan is willing to enhance coordination with China within the framework of the SCO and other organizations to jointly combat the "three forces" of terrorism, separatism and extremism and safeguard regional peace and stability.

The two sides also exchanged views on the Afghanistan issue, reaching consensus that relative parties should work to promote Afghanistan's peace and reconciliation process and to realize peace and stability in the country as soon as possible.