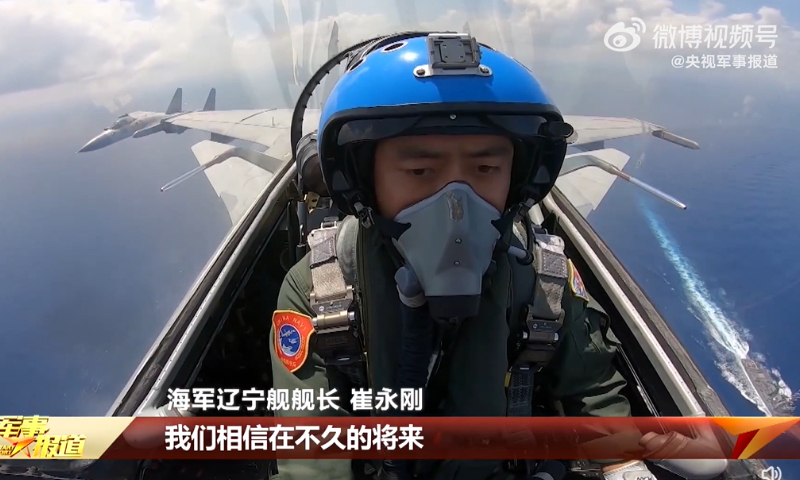 A recent report by China Central Television (CCTV) in celebration of the 10th anniversary of the commissioning of China's first aircraft carrier, the Liaoning, revealed a scene in which aircraft carrier Liaoning-based J-15 fighter jets flew over what seems to be an Arleigh Burke-class destroyer, leading to discussions on social media on Monday.

Facing provocations by foreign forces, Chinese forces have the right to identify, track, monitor and drive them away when necessary, experts said, noting that the Chinese warplanes' operations were safe, professional and in line with international norms.

The CCTV report, originally published on Friday, showed that two J-15 fighter jets flew over a warship parallel to the latter's direction of sailing at an undisclosed location at an undisclosed date. Chinese netizens pointed out on Monday that the warship seems to be an Arleigh Burke-class destroyer.

Song Zhongping, a Chinese military expert and TV commentator, told the Global Times on Monday that this warship indeed has the characteristics of an Arleigh Burke-class destroyer.

Chinese warships and warplanes have the right to identify, track and monitor foreign vessels if they approach and make provocations near Chinese waters or exercises, Song said.

Judging from the CCTV report, the Chinese J-15 fighter jets maintained a proper distance with the foreign vessel, as the Chinese pilots carried out the mission safely and professionally, Song said.

"China has been training carrier-based pilots for more than a decade, and with training courses becoming increasingly challenging, the pilots are becoming more capable. They have garnered long flight time and are very experienced," Song said.

While the CCTV report did not give details on where and when the flyover took place, a separate report by CCTV on Sunday, not necessary covering the same event, revealed that when the Liaoning aircraft carrier group was on a recent exercise in the West Pacific, it spotted a group of unknown aircraft approaching. Several J-15 fighter jets took off to deal with them.

It has become routine for the carrier group to deal with such situations, the report quoted Chen Jian, head of an undisclosed department of the Liaoning carrier group's command center, as saying.