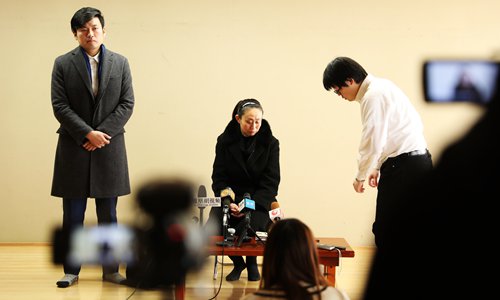 Jiang Qiulian (center), the mother of 24-year-old Chinese student Jiang Ge who was killed in Japan last year, attends a press conference ahead of the trial of suspect Chen Shifeng in Tokyo on Sunday. Photo: IC

A Chinese student denied deliberately stabbing his ex-girlfriend's roommate to death on Monday at the first day of a trial in Tokyo that is making headlines in China.Chen Shifeng admitted stabbing Jiang Ge at Tokyo District Court on Monday, but denied planning or intending to kill her, the news site people.cn reported.Chen was charged last year with the murder of postgraduate Jiang outside her second-floor apartment unit in Nakano Ward, Tokyo, around midnight on November 2. Chen and his ex-girlfriend were living together between June and August, Kyodo News Agency reported, citing police. After they broke up, the girl went to stay with Jiang, a friend from her Japanese-language school.It was the victim Jiang who was clutching the knife when a quarrel erupted, Chen's defense lawyer said. It was only during a struggle that Jiang's knife accidentally slit her neck and she fell to the ground, people.cn reported, citing trial records. Chen then stabbed Jiang nine times as she lay on the ground, but in the defense's opinion, the fatal - accidental - blow was to the neck. The knife belonged to the laboratory where Chen studied, the prosecutor's report showed. But there was no evidence to prove that Chen had got the knife from the lab, Chen's lawyer explained.In fact Jiang's roommate Liu Xin - Chen's ex - lent Jiang the knife, the defense said. Liu later refused to open the door as Jiang begged for help. Jiang bled to death outside her door, Chen's lawyer said.Liu said before the trial she heard nothing and did not shut Jiang out. Online critics have nonetheless attacked Liu for a "lack of conscience" and some have suggested she be held legally responsible for the death, people.cn reported. Jiang's mother Jiang Qiulian handed in a petition with more than 4.5 million signatures at the court in Tokyo on December 1 calling for the death penalty, people.cn reported. The trial is expected to last a week. The verdict should be handed down on December 20, The Beijing News reported.