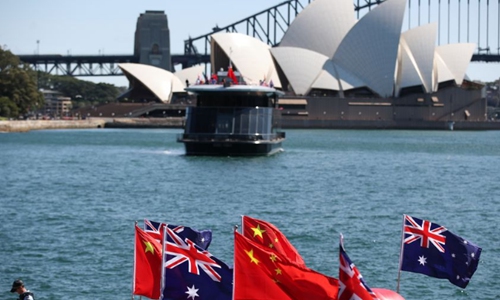 Chinese and Australian national flags are seen at an event in Sydney, Australia. (File photo: Xinhua)

Although Australian government is making efforts to attract international students back to school, many Chinese families with students of Australian universities stranded in China due to travel and flight restrictions expressed that they are considering postponing return to Australia, given the rising number of racial discrimination incidents against Asians, and lingering coronavirus risks in Australia.

Australian Prime Minister Scott Morrison announced that the country's international students are expected to be able to return "in a very controlled setting" in July. However, those students who plan to return must be registered into "pre-approved plans from particular institutions," Australia's ABC News reported on Friday.

One student, surnamed Lou, a freshman studying at the University of Melbourne, told the Global Times that she plans to continue her study in China, and finish her second semester of study at home, as the university will continue to provide online courses for the remainder of the semester, while also being hesitant about the frequent discrimination against Asians in Australia.

If fact, Lou plans to take a gap year if the current situation doesn't improve by the end of the year, she said.

Another Chinese student, surnamed Liu, said that even with the student visa situation under review, there is no confirmed information about whether the border will be open to Chinese nationals in July.

Liu is now stuck in a dilemma to choose either Australia or New Zealand to finish her master's program, mainly because the anti-China sentiment has increased in Australia, "even though I could continue my study in Australia in July, I would probably prefer to continue learning online in China," she said.

However, some students still hope to return to Australia to finish their studies as soon as the current restrictions are lifted, Zhou Haoran, a Chinese student studying in Adelaide, told the Global Times, noting that Australia's universities are hoping their international students finish their study while in the country, because education is one of Australia's most important industries.

"One local university is already arranging chartered flights to take Chinese students to Australia," Zhou said, adding that one of his fellow students had decided to change from an Australian university to one in New Zealand.

Parents of some Chinese students are also making backup plans for their children's future, considering the increased anti-China sentiment in Australia. Lou's mother, for example, told the Global Times that she wants her daughter to return to China after she graduates, for safety reasons, although she originally planned to stay in the country for further study or employment.

"In the beginning, we thought that, at least, Australia was much safer than the US, and it had excellent universities and a good environment, but we have changed our minds now," she said, adding that her daughter had been harassed on the street for wearing a face mask amid the pandemic.

China's Ministry of Education released an alert on Tuesday, warning Chinese students to assess the risks and be cautious when choosing to study or return to Australia, considering the more frequent incidents of discrimination against Asian people in the country.