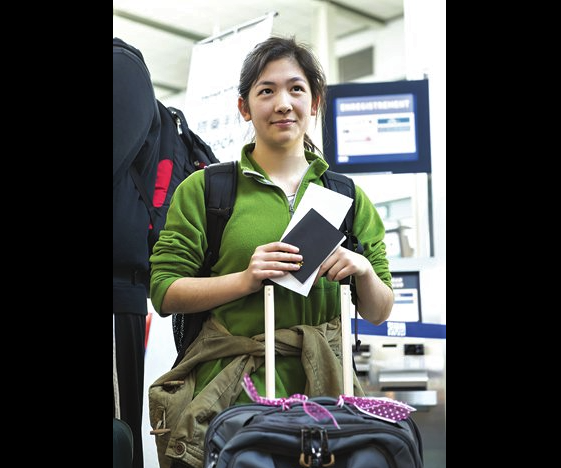 Canada's universities are opening their arms wider to international students, especially those from China, who are taking on multiple challenges as well as enjoying the novelty of their overseas school life.

In the capital city of Ottawa, post-secondary institutions are receiving ever larger numbers of foreign students in order to boost international enrollment to offset a projected drop in Canadian students.Chinese students flock in, which is a reflection that affluent parents spend more on their children's education and expect them to grow up in a more cosmopolitan environment.Taking on challenges"I think Canadian university is more challenging for us," said Jiang Shuhao, who came from China's southern city of Shenzhen, Guangdong Province to study commerce in management information systems at the University of Ottawa.Studying at high schools in China is more difficult than at high schools in Canada, but studying at universities in China is easier than in Canada, said Jiang."I'm studying here at my university, facing a lot of assignments, mid terms and finals," he added.Moses Fu, who came from China's northern city of Fushun and studies accounting at the same university, listed language barriers as one of the hurdles that Chinese students must overcome in the higher education in Canada."Study English hard. Be prepared for English," said Fu.However, Fu believed that familiarity with English will become realized as time goes on, and one will become familiar with the Canadian culture and lifestyle.Apart from academic and language challenges, the cold weather in Canada is another concern for many Chinese students, particularly those from South China, where it is humid and warm year round."Bring enough clothes to Canada. I was freezing in the winter here because I didn't bring enough clothes," said Charles Chauhei Yeung from Hong Kong, who studies marketing at the University of Ottawa.Timely influxThe University of Ottawa has 1,350 new international students registered in the academic year of 2017, its largest number so far.The University of Ottawa aims to double the number of foreign graduate students enrolled, and grow undergraduate enrollment by 50 percent, until international students make up nine percent of the student body.The influx of Chinese students has just had such a demand met.Similarly, Algonquin College in Ottawa wants international students to count for 10 percent of its enrollment in the long term.Algonquin has traveled to 30 countries to recruit students and opened offices in Beijing, China and Mumbai, India, the two countries, which are the most important to the college.Business and information technology programs are its most popular majors among foreign students, according to the school.As for the reason of the demographic change, the Council of Ontario Universities has long predicted a drop in Canadian-born young people because the children of baby boomers have passed university age.Why Canada?While universities in Canada have a demand to beef up their capacity of international students, why do Chinese students choose Canada rather than other destinations to complete their higher education?"The first reason is because of safety. It's a much safer place," said Charles while reviewing his past indecision between Canada and the US.Jiang prioritized Canada's diversified culture and Fu highlighted its different techniques in education."There will be a good studying environment, a good education," Fu said."Canada is like more freedom. You can chat with friends in the classroom," Charles echoed.For the city of Ottawa, the Chinese trio held different views. A smaller population may be a better fit for one, but not all."There's actually barely anyone on the street," complained Charles, who was accustomed to the hustle and bustle of Hong Kong.Jiang liked the peace and serenity of the capital, saying that "Ottawa actually doesn't have a lot of people, which I really like. One reason why I came to Ottawa is that there are not many Chinese. I think it's a great environment to study and learn English."Work and study hardAccording to ICEF Monitor, a dedicated market intelligence resource for the international education industry, the total body of international students in Canada topped 414,946 in 2016, a 17.5 percent rise over 2015, and the new international students chalked up a 22 percent increase.Those from China and India made up over half of the whole body, trailed by Brazil, Vietnam and the Philippines, it added."Work hard and study hard in Canada. This is such a great experience," said Jiang, while looking back on his days in Ottawa.But at the same time, foreign students like Jiang have to cope with the academic pressure and linguistic and cultural barriers."Just don't be so stressed. Everything will be all right as time goes on," said Fu.