A partial resumption of classes has made American campuses new coronavirus hotspots, as the trend may continue in the following weeks. Students said campus life is "gloomy every day," and some urged stronger control measures to protect students, staff and faculty members. 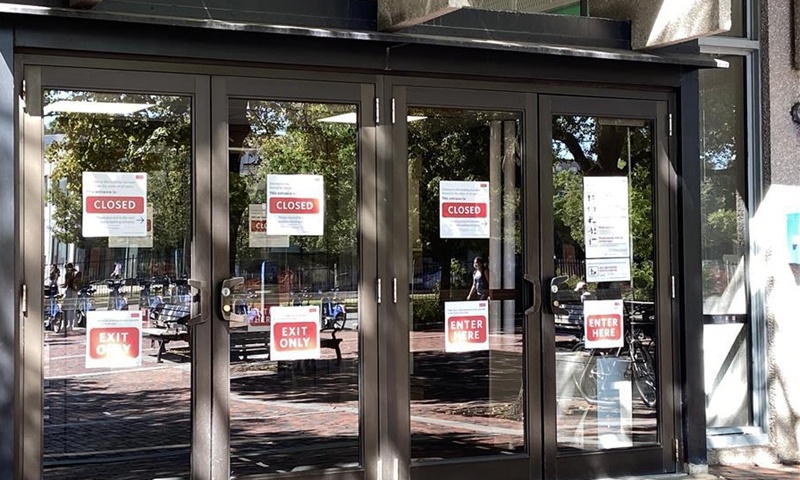 Signs of measures against COVID-19 are seen on the doors of the George Sherman Union (of students) at Boston University, Boston, Massachusetts, the United States, on Sept. 4, 2020. (Photo: Xinhua)

The US has recorded more than 6.5 million infections so far, and a New York Times survey found that American colleges and universities have seen more than 36,000 additional coronavirus cases in the past week, bringing the total of campus infections to 88,000.

Among 203 "college towns" that students account for at least a 10th of the population, half have experienced their worst two weeks since the pandemic began, as students returned in late August, NYT reported.

Chinese universities have also resumed classes in the past weeks, and students are flocking back to campuses in different batches, with control measures such as campus seal-offs, making large lectures online and reducing group activities. Beijing universities requested freshmen to report their health situation 14 days ahead of classes, submit negative nucleic acid test results, and get a green code to enter the campus.

The new semester pictures were different due to the bigger picture of epidemic control in the two countries. Yang Zhanqiu, a Wuhan-based virologist, told the Global Times that US students hanging out, ignoring social distancing and not wearing masks on campus contributed to clustered infections, Yang said.

The contrast also frustrated Chinese students who stayed in the US to finish their studies. Some students reached by the Global Times said they were fed up with being isolated, but said resuming classes was even worse. They said they feel "gloomy without hope."

"My daily routine is boring - get up, eat, have online classes, watch news, sleep - which drives me nuts," Zeyu, who attends a university in New York City, said. "No parties, no friends around, no freedom, only worries over the rise in campus infections."

Zeyu decided to stay in the US for fear of infection risks on the way back to China, and that the US may ban him from re-entering.

The depression caused by long-term isolation has also prompted many university students who just returned to campus and reunited with their peers to hold parties and hang out more frequently.

Six students at Miami University were summoned for violating a city ordinance on mass gatherings after they held a party in early September, despite at least one of them testing positive for COVID-19.