XIAMEN/PARIS, June 25 (Xinhua) -- A Chinese high school girl did not breathe a sigh of relief until news came Tuesday from France about the safety of her luggage that contained staff for combating the COVID-19 pandemic. 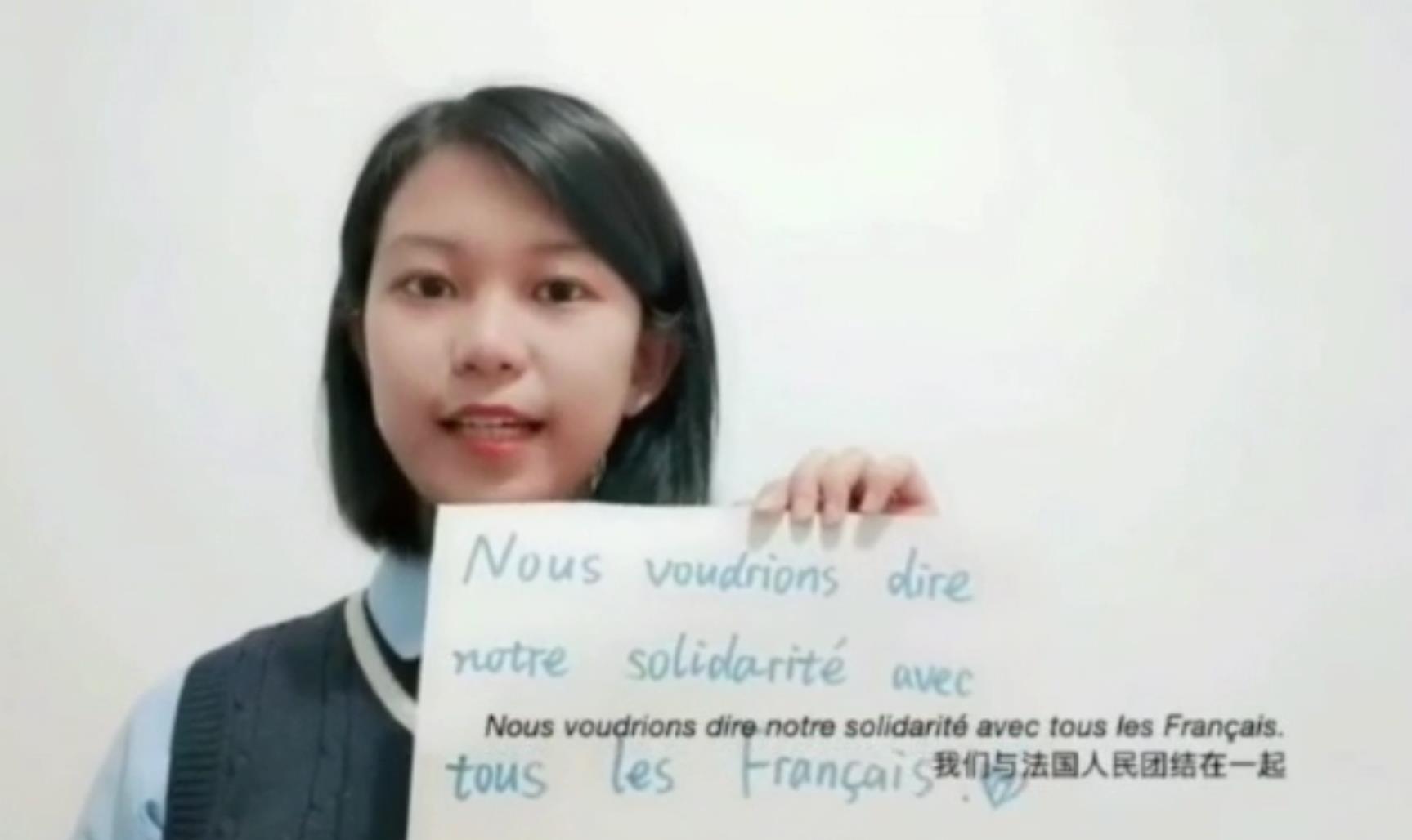 Guo Lanlan, a 17-year-old sophomore at China's Xiamen Foreign Language School, has been worried over the past month about a transparent 24-inch luggage sent from China's southeastern city of Xiamen to France in May.

In the luggage were some masks, letters and gifts prepared by Guo and her classmates for their counterparts in Lycee Alain Chartier, a high school in France's northwest region of Normandy.

Guo received the good news from Jean-Francois Lesacher, principal of Lycee Alain Chartier who told her about the safe arrival of the luggage in a transnational video call on Tuesday.

"Through such a luggage of gifts, we want to show our French friends that we are facing this pandemic together," Guo told Xinhua. "What we want to share with them is not just some masks, but also the courage and confidence to overcome this pandemic."

"WE NEED TO DO SOMETHING"

Since the establishment of a sister-school relationship between Xiamen Foreign Language School and Lycee Alain Chartier in 2010, the two schools have maintained close ties through online meetings, exchange students and experience-sharing, with the deep friendship shared between students of the two sides.

Earlier this year when China put in place a variety of strict measures such as the postponing of the opening of the new school semester and the strict management of residential communities to fight COVID-19, some Chinese students in Xiamen Foreign Language School received emails and calls with encouraging words from their French peers.

After months of hardship, China's efforts to contain the coronavirus have yielded progress, while in France, a nationwide lockdown came into effect in March as the virus was raging across Europe.

"We have been paying close attention to the pandemic in France, and the worsening situation there worried us," said Yang Chun, a French teacher at Xiamen Foreign Language School, who has been updating the latest news about the pandemic in France with her students in an online French class.

Experiencing similar hardship such as staying at home with schools and restaurants closed, Guo said "when we heard that our friends in France have also been kept in home by the virus, with daily life disrupted, we know we need to do something to show our support for the French students."

"A TOKEN OF WISHES AND FRIENDSHIP"

"Yang told us that the personal protective equipment like masks was in scant supply in France in March, so we think for the time being, no gifts could better express our wishes for their safety than some masks," Guo said.

Without any delay, Guo and her classmates started filling the special luggage with more than 1,000 masks, letters of encouragement and gifts for the students in France.

"Unite we will win ... China and France are all heroic countries," Duan Yanjing, a student at Xiamen Foreign Language School, wrote in a letter.

"I believe that your brave country will overcome the epidemic soon!" she added.

However, as most overseas shipping routes between China and Europe have been canceled or postponed, the transnational delivery of the 24-inch luggage became a challenge amid the pandemic.

"We have turned to maritime transportation operators and rail logistics companies, but none of them could offer help during the pandemic," Yang said.

Fortunately, it took a turn for the better when FATRI, an epidemic-prevention products supplier based in Xiamen with operation in France, offered to help deliver the luggage.

"We were deeply impressed by the sincere friendship between teens of the two countries. During the time of this global crisis, the care and love these students held for each other is as precious as gold," said Nie Yongzhong, chairman of FATRI's board.

Across mountains and seas, three months after the students came up with the idea to send the gift, the luggage finally reached Paris in June by airplane and was handed over to Lesacher by Zhou Hui, a represent of FATRI in Paris, who drove over three hours from Paris to the high school.

"We know that against the context of the pandemic, sending such a gift requires more than just good-will," said Lesacher, who was deeply touched by the students' friendship and the long journey of the luggage.

"The whole thing can not be accomplished without joint assistance. It is a journey of love, representing wishes of many Chinese people," he said.

"The luggage is a token of wishes and friendship," Xie Hui, principal of Xiamen Foreign Language School, said during the video call with Lesacher.

"The delivery process of this special gift proved that there is nothing that could cut off ties between us, not even the cunning virus," Xie added.