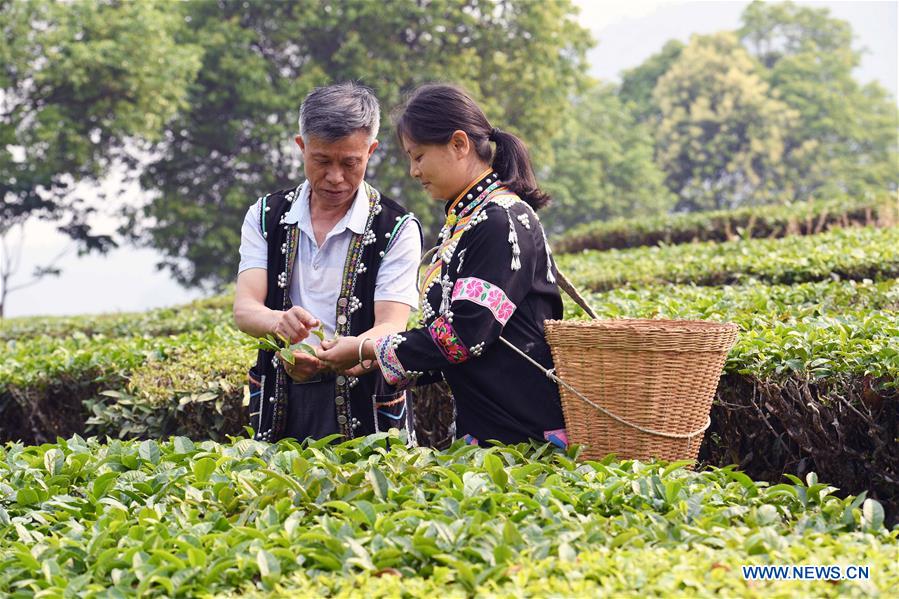 By restoring this ancient ritual, Zheng Funian, a national intangible heritage bearer of the Zisun tea-making technique, together with his apprentices, was celebrating the addition of China's traditional tea-making to the intangible cultural heritage list of UNESCO in late November.

"More than a thousand years ago, our ancestors had already painted or written on the tea foam, which is even more sophisticated than today's latte art," Zheng said, adding that the processing of Zisun tea has existed since the Tang Dynasty (618-907).

As tea has been discovered and utilized by the Chinese people since ancient times, China's culture of making and drinking tea is popular all over the world, and the culture has also been innovated and is spreading more widely.

Manjuelong village in Hangzhou is one of the core production areas of China's renowned Longjing tea. From picking to roasting tea leaves, tea maker Tang Hejun has made tea by hand for years.

Longjing tea makers have to adjust the roasting time and technique depending on the moisture content and quality of the tea leaves, making each pot of tea unique.

"We have to deal with the 200 degrees Celsius hot pot every day," Tang said, adding that roasting tea is "tough work." As more people left the tea villages for big cities and machine-roasted tea sold much cheaper, manual tea roasting skills were once in danger of being lost.

The tea villagers have come up with various ways to pass on the tea art. This year in the Longjing tea production area, a course on manual tea-making techniques has attracted more than 200 people, mostly youngsters, to participate. Fu Bo was one of them.

"Compared with machine-roasted tea, hand-made tea has abundant flavor. Different tea makers would give the tea unique tastes, which is the charm of Chinese tea," Fu said. He grew up in a tea garden, but through the activity, he first got to know the essence of tea culture.

Fu said tea has become a common topic for young people, and learning to roast tea has now become a new trend among the younger generation.

"About 50 young villagers came to participate in our courses, of which the youngest was born in 2013." Sun felt relieved that more young people are willing to learn tea production techniques.

The participation of the young generation has injected fresh blood into the Chinese tea industry.

"Youngsters in China may be familiar with Starbucks, but very few know about Lu Yu," said Liu Yanli, the manager of the brand. Tang scholar Lu Yu, known as the Sage of Tea, wrote "The Classic of Tea," which is the first treatise in China in which knowledge of tea and related practices were elaborated systematically.

Liu said they opened the tea shop to offer customers a series of fresh and healthy Chinese tea drinks to attract more to learn about traditional tea culture.

They use local tea leaves as the base, and mix the tea with fresh milk and fruits like pears and peaches to create new tea drinks, which could be "better accepted by young consumers."

Data released by China's e-commerce platform Meituan shows that in 2021, the volume of China's tea beverage market was 10.9 times that of coffee, and those born after 1995 have become the main force in tea beverage consumption.

Tea is not only a daily drink welcomed by more young people, but also plays a more important role in their social life.

In a teahouse in an ancient block of Jinhua City, Zhejiang, people gathered around the owner, who chatted with the guests as he brewed and poured tea for them.

The coastal province of Zhejiang is an important exporter of tea, with tea products reaching over 110 countries and regions.

Fusheng Township in Shaoxing City, Zhejiang, is a major tea-producing area for export. The tea factories in Fusheng export hundreds of tonnes of semi-finished products of matcha to Japan every year.

With a dream of "making the top Chinese matcha," tea makers in Fusheng have now built up over 400 hectares of organic tea gardens and obtained international certification, making them one of the top quality matcha producers in China.

"In the early years, we exported low-quality tea and semi-products, so the returns were low," said Xia Yan, an export salesman from Shaoxing Yuchacun Tea Company. Now, as tea quality and production improve, the company exports high-quality tea, mainly matcha, to markets such as the EU, the United States, Canada, Australia and Saudi Arabia every year.

In 2021, the company exported nearly 200 tonnes of organic matcha, with a value of 2.5 million U.S. dollars, and the average price was about five times higher than that of ordinary exported green tea.

"New types of tea drinks are an important force in promoting Chinese tea to the world. In European and North American markets, beverages made from Chinese tea sell like hotcakes," said Liu Zhirong, chairman of Shaoxing Yuchacun Tea Company.

According to Wang Yuefei, director of the Tea Research Institute, Zhejiang University, there is great potential for high-quality tea exports.