A teacher who has inspired children to stay in school in an impoverished remote mountain village in China has made the shortlist for the Global Teacher Prize, awarded by London's Varkey Foundation. 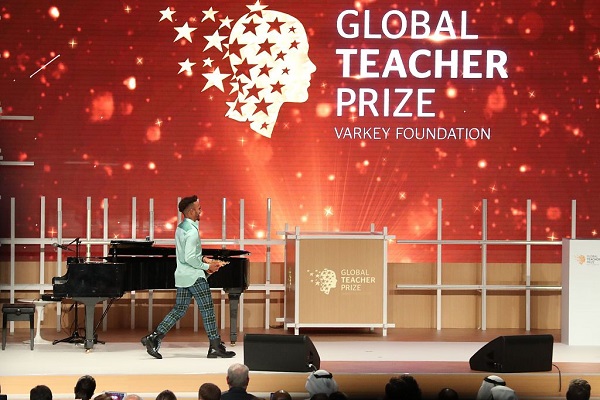 Yu Shuming, an all subjects teacher at Baihuzhuang Primary School in Xingtai county, is the only Chinese teacher who has made it down to the shortlist of 50 candidates for the award, now in its fifth year, that recognizes one exceptional teacher who has made an outstanding contribution to the profession.

Those 50 will be further whittled down to 10 finalists, with the winner announced at an awards ceremony in Dubai in March.

Yu has been a teacher for 26 years and lives in an area prone to flash floods and mudslides, where many children drop out of school due to poverty and the harsh environment.

He uses school discussions to inspire his students to pursue independent and cooperative learning, adding his own methods of teaching literacy, and has been known to use his own wages to encourage children to stay in school, as well as helping raise more than 1.2 million yuan ($174,000) from other parts of the country.

Yu said seeing the children of low-income families going to school, learning to read and write, taking exams and then heading away from poverty to the big cities were his biggest rewards, and called on local government and the education authorities to do more work in rural areas.

"I hope to win this award because it will help me to change the education situation in China's rural areas," he said.

Yu's teaching has made a big difference to his students. In 2005, all 32 students in the senior high school entrance examination succeed in winning places. Many have been admitted to key graduate or national universities and nearly 30 students who had previously dropped out returned to school.

If he won the award's $1 million prize, Yu said he would use it for classroom reform and innovation, to buy teaching equipment, and to aid the construction of local mountain roads so that people can access services and education.

Sunny Varkey, founder of the Varkey Foundation and the Global Teacher Prize, said, "Congratulations to Yu for reaching the final 50. I hope his story inspires those looking to enter the teaching profession and highlights the incredible work teachers do all over the world every day."