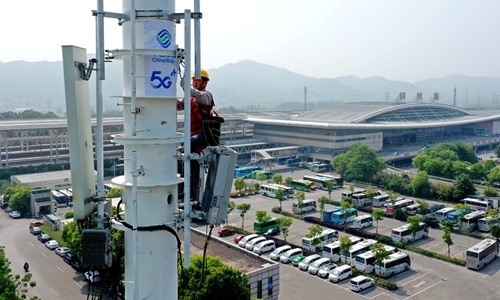 The driving effect of robust 5G rollout in China has become prominent as it is bringing increasing profits to local telecom carriers, with more users embracing the technology.

A jump in 5G users contributed to this better-than-expected performance. About 251 million users have adopted 5G, accounting for 26.5 percent of the carrier's user base.

As the mobile operator accelerated efforts to push 5G into the fast lane, it invested 50.2 billion yuan in related operations in the first half.

The carrier is not the only one reaping benefits from 5G in China. China Telecom on Tuesday reported a strong first half, with revenue surging 13.1 percent compared with last year. It now boasts 131 million 5G users with a penetration rate of 36.2 percent.

"The application value of 5G began to emerge," said China Telecom. Its tailored 5G services have extended to government affairs, finance, industrial and social sectors, with the scale of application scenarios multiplying now.

"As an early starter, China is giving mounting attention to 5G development and positioning it as a basis for national infrastructure building. That leaves carriers huge opportunities to expand their businesses," he noted.

China deployed 916,000 5G base stations as of middle July - 70 percent of the world's total rollouts.

The rapid jump of 5G users also facilitated industry developers to manufacture more cost-effective telecom products. It is estimated that 280 million 5G compatible terminal devices will be shipped in 2021, according to Jiang Junmu, a veteran telecom industry analyst.

And, US investors could have enjoyed the benefits of the growth of Chinese carriers.

However, the US government has alleged Chinese carriers are linked to China military, without providing any evidence, the three Chinese telecom giants - China Mobile, China Unicom and China Telecom - have to list on the Chinese A-share market, after being delisted from the New York Stock Exchange.

The delisting resulted in huge loss for the US capital market and US investors. Moreover, the delisting has seriously damaged the US markets' attraction to Chinese companies, and presumably less will go to New York for a listing.