BANGKOK, Jan. 14 (Xinhua) - A female tourist from the central Chinese city of Wuhan has been confirmed as the first person in Thailand infected with the novel coronavirus. 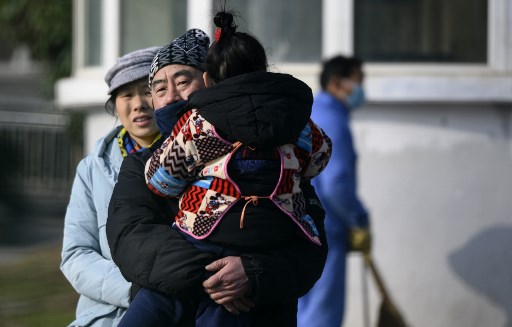 A man holding her daughter leaves the Wuhan Medical Treatment Centre, where a man who died from a respiratory illness was confined, in the city of Wuhan, Hubei province, on January 12, 2020. (Photo: AFP)

She was then found to have been infected with the novel coronavirus. She was sent from the airport to a hospital where she has recovered and has been ready to return to Wuhan, said Anutin.

No other tourists to Thailand have been found infected with the new virus, according to Anutin.

He said authorities at major Thai airports, including Don Mueang, Phuket, Chiang Mai and Suvarnabhumi, have been on alert for a possible pandemic of the new virus and have scanned tourists from Wuhan since earlier this month.

The cluster of the novel coronavirus was initially reported on Dec. 31. Since then, most cases were found to involve workers at or frequent visitors to Wuhan's Huanan Seafood Wholesale Market, which has been temporarily closed while environmental disinfection is carried out.

Local authorities have so far confirmed 41 cases of the novel coronavirus in Wuhan, of which seven are classed as severe. One of the patients has died, though they were said to have had underlying health conditions.

The main clinical symptom of the novel coronavirus is fever, while a few cases include breathing difficulties, with chest radiographs showing invasive pneumonic infiltrates in both lungs.