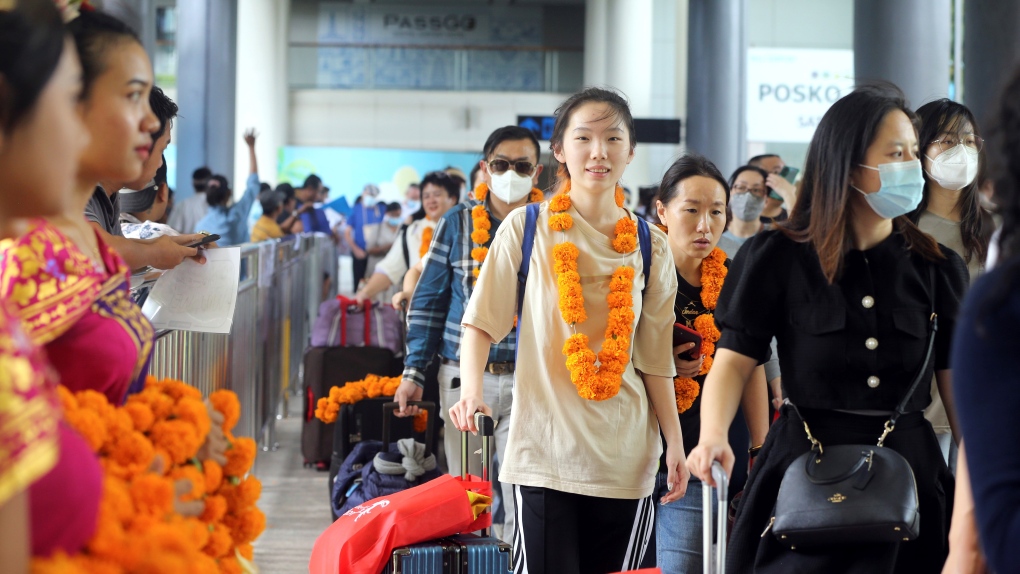 BEIJING, Jan. 25 (Xinhua) -- "We cannot wait to have the Chinese back in our restaurants. We missed it so much," said Alix Pickard, a senior manager of a British restaurant corporation.

China relaxed its outbound travel restrictions amid its recent overall COVID-19 response shift. Officials and tourism practitioners across the world are eagerly anticipating the return of Chinese tourists.

The comeback of Chinese travelers in the international market will fuel the recovery of the tourism sector worldwide and promote cultural exchanges between China and the rest of the world, experts have said.

In Hakkasan, a Chinese restaurant in London, guests were hanging their Spring Festival wishes to a wishing tree installed recently.

The restaurant, like many others around the world, has put up traditional Chinese decorations and introduced a limited menu celebrating the Year of the Rabbit, the Chinese zodiac animal representing the year of 2023.

Such a festive scene can be observed in numerous hotels, restaurants, shopping malls and attractions across the globe, which recently launched products and services with Chinese elements in a bid to attract Chinese tourists and facilitate their journeys.

A giant rabbit is standing at the entrance of the Shangri-La Hotel in Istanbul of Türkiye, welcoming visitors amid a sea of red lanterns.

In Greece, the authorities have prepared a "Chinese-ready" airport to create a feeling of home for travelers from China, according to Ioanna Papadopoulou, director of communications and marketing at Athens International Airport.

Virtual assistants speaking Chinese are in place to provide visitors with information in their native language, while Chinese customers can use all payment methods they use back home in the airport's duty-free shops.

Tourism officials and professionals are looking forward to the mass return of Chinese travelers as early as possible, after their absence in the global tourism market for three years.

"We really missed the Chinese tourists over the last three years and we would like to welcome you back as soon as possible," Flemming Bruhn, director of VisitDenmark, the Danish national tourism agency, told Xinhua.

For Pickard, whose company manages four restaurants in London, one of the greatest pleasure before the pandemic was to see her restaurants filled with Chinese guests in the afternoon.

"We've really missed that," said the director of marketing at Tao Group Hospitality. "It's great to see everyone coming back again, it makes us so happy."

In the Chinatown of Bangkok, the young daughter of Liu Lingling, a Chinese tourist to Thailand, screamed with delight when she saw the 200 meters of Yaowarat road was lit up all of a sudden.

The road, which gathers many Chinese descendants to live and do business, was decorated with a 45-meter-long light tunnel and lanterns of various shapes to celebrate the Chinese New Year.

Liu and her family, who came from the city of Wuhan in central China, haven't travelled abroad since the pandemic erupted three years ago.

"This is our first overseas trip since the outbreak of the pandemic, we are so excited and happy," said Liu. "Although it's in Bangkok, we can feel the atmosphere of Spring Festival."

In Türkiye, Chinese tourist Yan Jian shared with Xinhua his joy of travelling in Istanbul, the nation's biggest city and a well-known destination for tourists. "I haven't gone anywhere for the past three years, it feels so good to go abroad this year."

"The experience here is great," Yan said. "The view is wonderful, food is delicious and the local people are extremely hospitable."

Like Liu and Yan, many Chinese travelers were impressed by the warm receptions from locals, the rich festive vibes and substantial facilitation throughout their first cross-border trips since the pandemic.

Lately, the famed resort island of Bali in Indonesia welcomed the first group of Chinese tourists who arrived by charter flight after China's COVID-19 response shift.

The Chinese were greeted with local songs and dances, as well as the lion dance, a traditional Chinese performance usually staged during the Spring Festival.

One of the tourists was given a flower garland from the governor of Bali, a gesture of welcome for esteemed guests in the local culture.

In Labuan Bajo, an Indonesian town, visitors were immersed in the festive atmosphere of Spring Festival created by hotels putting up decorations of Chinese style and introducing special menus with Chinese cuisine.

"It's surprising to me that I could eat Chinese food and hear an artist playing Chinese festive songs using the local instrument at my hotel. I felt really welcomed here," said Yang Miao, a Chinese tourist from east China's Jiangsu province.

In Egypt, Fu Bo, a Chinese visitor from Beijing and a fan of ancient Egyptian civilization, was overwhelmed by the friendliness and hospitality from the Egyptians.

"The Egyptians are generally friendly to Chinese tourists, they even greet us in Chinese," said Fu, after attending a reception hosted by the Chinese embassy and the Egyptian government at the Cairo International Airport.

He noted that his entry to Egypt was fairly convenient as the North African country adopted a visa-upon-arrival policy for Chinese visitors, and there is also "no difficulty in customs clearance."

Worldwide tourism bans since 2020 have dealt a severe blow to the business of Farag Mohammed, a local camel farmer working near the Great Pyramid of Giza in Egypt.

Mohammed, who makes a living by offering tourists a ride on camels' back, has been struggling to feed his camels and raise his family for the last three years.

The camel breeder of 27 years pins hope on the return of Chinese visitors to boost his revenues and make his life easier in the future.

"Chinese are fond of sightseeing on a camel's back," Mohammed said. "I like Chinese tourists."

The last three years have been difficult for many people like Mohammed working in the tourism-related sectors, but some have already sensed a favorable turnaround as the number of their Chinese customers began to pick up this year.

"Sales are already much better compared with last year. I'm so happy and grateful. Hopefully my fortune will keep coming," said Jelita Riyadi, who owns a shop in Glodok, a famous Chinatown in Indonesia's capital Jakarta.

Over the past days, her stall, selling red envelopes, clothes and decorations featuring the image of the rabbit, has been frequently visited by Chinese people celebrating the Spring Festival.

The value of each cross-border booking increased by an average 32 percent year-on-year, said the report.

The most popular destinations for Chinese tourists include Australia, Thailand, Japan, Malaysia, Britain and Indonesia. Bookings for Bangkok saw a year-on-year growth of more than 10 times.

Officials and experts worldwide argued that China's resumption of outbound tourism, which used to be a considerable source of revenue for many economies depending heavily on tourism, would substantially accelerate the revival of the sector and promote cultural exchanges on the international level.

As Chinese tourists actively participate in shopping and cultural tours, they are highly valued for all economies due to their large number and strong spending power, said Irfan Karsli, head of the Istanbul-based Ligarba Travel Agency.

"China's stable economic development and wider opening-up are of great significance to the global economic recovery. The long-awaited return of Chinese tourists has brought hope to the recovery of tourism industry in Thailand and other countries around the world," said Wichai Kinchong Choi, senior vice president of leading Thai bank Kasikornbank.

John Grant, an analyst at the global travel data provider OAG, said that short-haul regional demand from China to markets like Thailand and Vietnam will noticeably grow in the second half of the year, followed by growth in Europe and North America.

For Greek Tourism Minister Vassilis Kikilias, the reopening of the Chinese market is also about cultural communications, as Chinese tourists are "deeply involved in finding out about Greek culture and civilization."