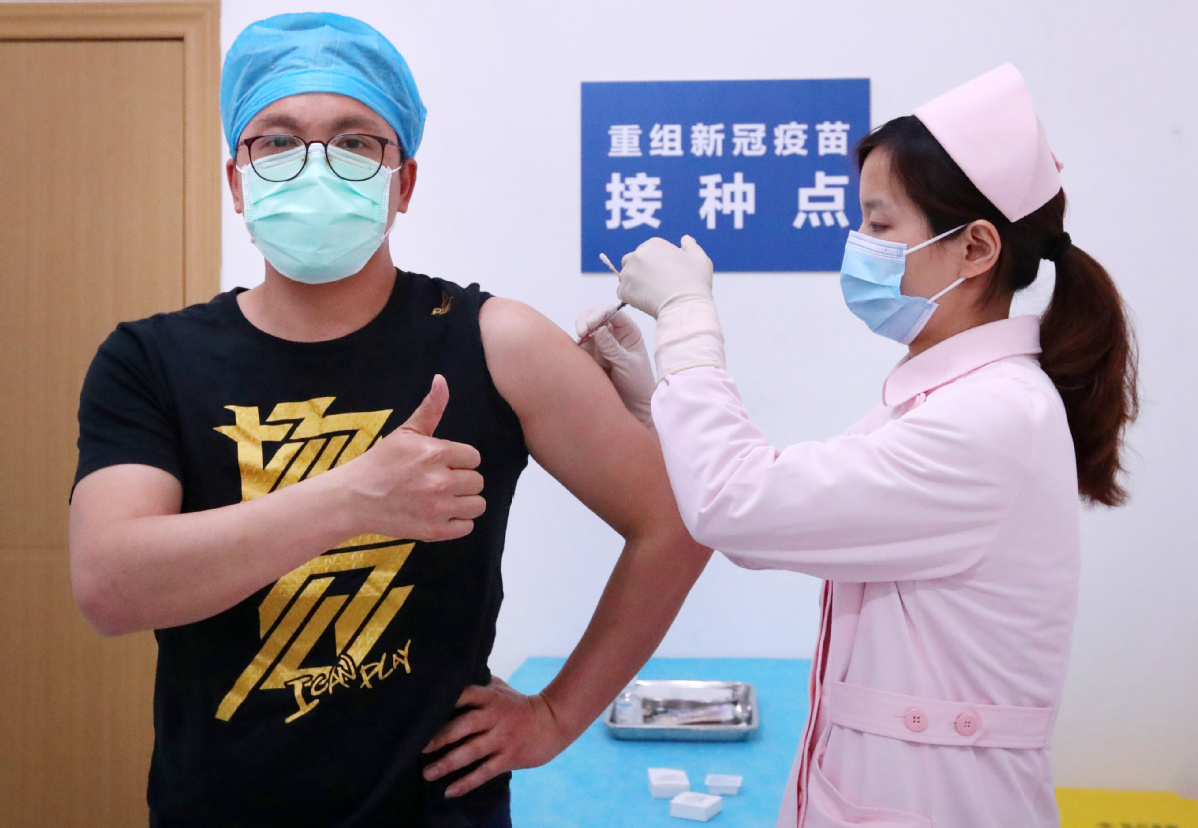 A volunteer, 36, is given a candidate vaccine for the novel coronavirus in Wuhan, Hubei province, last Tuesday. (Photo: China Daily)

China's first candidate vaccine for the novel coronavirus may be put into additional trials in other countries seriously hit by the pandemic if the ongoing initial trial proves it is safe and effective, the top researcher for the vaccine said.

The first stage clinical trial for the vaccine was started in Wuhan on March 16 after authorities approved. It has been proceeding smoothly, and its results will be published in April, said Chen Wei, a member of the Chinese Academy of Engineering. Wuhan is the Chinese city that was hardest hit by COVID-19.

"If the initial results prove the vaccine is safe and produces (desired) effects, we will continue to test its effectiveness overseas through international cooperation if the global epidemic continues to spread," she said.

In this way, the vaccine may be used in other hard-hit countries as soon as possible to bolster their efforts to control the pandemic, said Chen, also a researcher at the Academy of Military Sciences.

After strenuous nationwide efforts that have lasted for more than two months－including the lockdown of Wuhan, a city with more than 11 million people－the COVID-19 outbreak has been brought under control in China, with the daily number of reported cases falling to double digits and most of them imported from abroad. The number of patients receiving treatment has also been decreasing rapidly, with more recovered patients released from hospitals every day.

Many countries have shown interest in the candidate vaccine, and Chen said she and her team members are willing to cooperate with their international counterparts in the development of vaccines for the highly infectious disease.

Before putting the vaccine in trials in other countries, domestic trials may include foreigners living in China, she said.

"A vaccine may be the most effective solution to ending the global COVID-19 epidemic," she said.

It is still unknown when the vaccine will gain approval for use, as it must be proved safe and effective first, Chen said, adding she is confident in its early availability for use.

Following the outbreak of COVID-19, many other Chinese institutes are also stepping up efforts to develop vaccines for the disease. Currently there are no effective drugs for the disease, although several candidate drugs are in clinical trials.

The first phase clinical trial for the vaccine, conducted in Wuhan, aims to evaluate the safety and tolerance for the vaccine in healthy adults between 18 and 60 years old. A total of 108 volunteers had completed inoculation as of Friday, and are under medical observation.

Wang Li, a freelance writer in Wuhan, said she immediately registered to become a volunteer for the clinical trial in mid-March when she saw the recruitment notice on WeChat.

"I had been working as a volunteer for residential communities since the lockdown of Wuhan, and saw how much people fear the disease," she said. "I really hope a vaccine for the disease can be available as quickly as possible to end the epidemic."

Wang said she underwent a strict physical checkup before being given an injection of the vaccine on Tuesday. She has been under observation in quarantine at a hotel. She said she feels normal and safe.

Li Zhiji, another volunteer in the clinical trial, said he received two shots on Tuesday, and is also under observation in isolation. He expects to receive a blood test in a few days to see the effects of the vaccine, he said.

"I am really honored to contribute to epidemic control and prevention by becoming a volunteer for the vaccine," he said. "I think a vaccine really needs to be available for use as soon as possible, considering the spreading global pandemic."