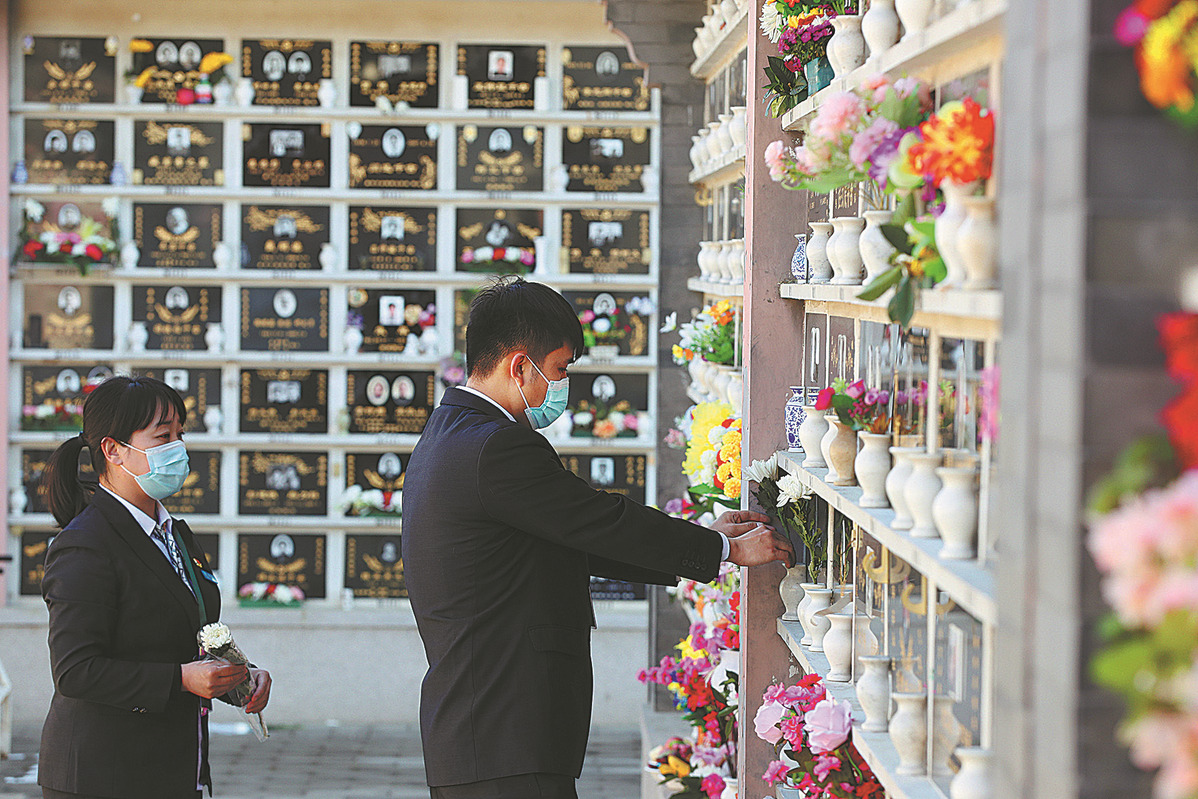 Staff members pay tribute to the deceased on behalf of their family at the Babaoshan Revolutionary Cemetery in Beijing on Friday. (Photo: China Daily)

Inputting her late father's name online, Zhang Mengmeng bowed three times to the memorial tablet on the screen, then lit a virtual candle and presented a bouquet in memory of her loved one.

Tomb-sweeping Day, also known as the Qingming Festival, is an important day in the Chinese lunar calendar. According to tradition, it is a time when people pay tribute to the deceased and worship their ancestors, visiting tombs and burning incense and paper money.

This year, the day falls on April 5, and people are just as keen as ever to honor their dear departed. However, due in part to the resurgence of the COVID-19 epidemic, many are conducting the ceremony online, rather than visiting physical tombs.

Zhang, 28, has settled for a mourning site called Cloud Memorial.

"Cloud Memorial is a good choice, and it is also conducive to epidemic prevention and control," said Zhang from the city of Jinan, capital of east China's Shandong Province.

The website that Zhang visited was launched by the Jinan municipal civil affairs bureau on March 20. So far, it has received 138,000 visits, with more than 70,000 "memorial halls" established online.

In fact, online tomb sweeping is not a new thing. In recent years, authorities in China have been promoting the practice to reduce air pollution and forest fires. It is considered safer and more environmental-friendly than the traditional approach.

Some have argued that online sweeping is less respectful and sincere, and for a long time this attitude prevented such a new approach from becoming prevalent. However, with many Chinese cities now fighting the epidemic, the new approach has gained more popularity, and more people like Zhang have changed their perspective.

"The epidemic has changed my ideas. Although I can't go to the cemetery to worship and sweep in person, through 'cloud' sweeping, I can express my thoughts and memories in honor of my father," said Zhang.

There are many different ways of commemorating ancestors these days, but the most important is the sincerity of expression, she added.

Wang Zhongwu, a sociology professor with Shandong University, said that, in the context of the Qingming Festival taking place under epidemic conditions, the practice of online sweeping is consistent with tradition, and both methods allow people to pay respects to their deceased relatives.

In addition to private memorial activities, the practice of online tomb sweeping has also been applied to large-scale public events, such as official remembrance ceremonies. The practice has already gained widespread acceptance during the Qingming Festival.

On the national online memorial platform for martyrs who died in the Anti-Japanese War during World War II and people killed in the Nanjing Massacre, more than 22 million online users have paid their respects and written peaceful prayers.

Online sweeping is not the only option for those seeking to abide by epidemic control measures. New approaches have been devised for those who are less comfortable with the online approach.

Shortly before the Qingming Festival, a man surnamed Zhang from the city of Taiyuan in Shanxi Province held a solemn and concise family memorial service for his late father at home. Amid soothing music, the gathered relatives recalled mundane life details from the deceased, and expressed their remembrance with sincere words.

Zhang said that it was the first time such a memorial had been held, and everyone felt that it was a good way to pay tribute. They will continue the practice in the future.

"There is no contradiction between Qingming tomb-sweeping and epidemic prevention and control," said Professor Wang. "It even promotes a green, civilized and safe 'new style' of ritual sweeping to a large extent, because all that has changed is the form of the ritual sweeping, and what remains the same is the sincere commemoration of the deceased."