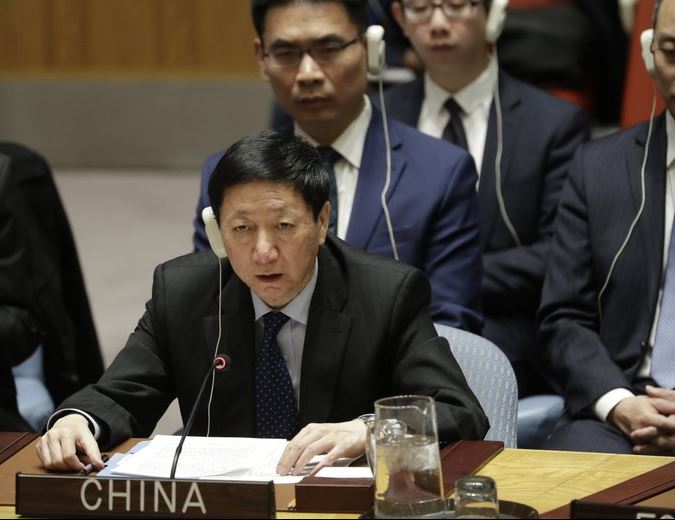 New York (People’s Daily) – Ambassador Wu Haitao, deputy representative of the Permanent Mission of China to the United Nations, on Thursday solidified his country’s anti-terrorist stance during the UN Security Council briefing on Threats to International Peace and Security caused by Terrorist Acts.

“Terrorism is the common enemy of mankind, affecting a country beyond its national border,” Wu said. “It is hard for any country to respond to it alone.”

According to a report by UN Secretary-General Antonio Guterres, the Islamic State of Iraq and the Levant (ISIL/Da’esh), despite recent military setbacks, still has some 20,000 soldiers in its ranks – allowing it to continue its dangerous transformation into a covert global network.

The report detailed that a significant number of ISIL-affiliated militants also exist in Afghanistan, South-East Asia, West Africa, and Libya, while a smaller presence exists in Sinai, Yemen, Somalia, and the Sahel region.

Wu said the recent terrorist attacks that took place in Afghanistan and Syria have resulted in tremendous harm.

“Faced with such a challenge and bound by the shared destiny, the international community should effectively implement a common, integrated, cooperative and sustainable security concept, effectively carry out relevant Security Council resolutions, strengthen cooperation to jointly respond to the threat of terrorism in light of its new trend and characteristics,” Wu said.

Wu recommended a four-step plan to curb all angles of terrorism throughout the world.

First, the international community should adhere to a unified standard, adopt a zero-tolerance and non-discriminatory attitude in combating terrorists regardless of where they are, what pretext they use, which countries they target, and what means they resort to.

Second, the international community should push for political settlement of regional issues, assist member states in achieving their economic and social development as well as poverty reduction and alleviation, refrain from linking terrorism with specific ethnic and religious groups, promote dialogue on an equal footing among civilizations and religions for harmonious coexistence, and endeavor to build new international relations.

Wu said that China, in recent years, has become deeply involved in the work of multilateral cooperation mechanisms such as the UN and the Shanghai Cooperation Organization. China has also actively taken part in the UN Global Counter-Terrorism Strategy Review and the High Level Meeting of Member States Against Terrorism, and assisted members in their counter-terrorism capacity building through the China-UN Peace Development Fund. Wu said these contributions have made China a central figure in the fight against international terrorism.

“China will continue to participate in and promote multilateral and bilateral counter-terrorism cooperation and will do what we can to provide assistance to developing countries in counter-terrorism materials and capacity building,” Wu said.