Several Chinese universities in cities including Beijing, Southwest China's Chengdu and Guiyang have conducted closed-loop management to ensure students and faculties' health amid this wave of flare-ups on campuses. 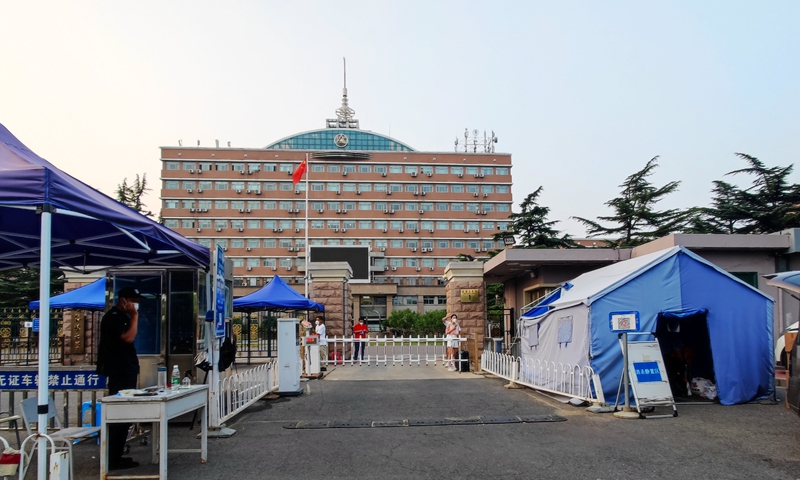 The Communication University of China has been placed under closed-off management on Saturday, after having reported several confirmed cases of COVID-19. (Photo: VCG)

At least four universities in Chengdu such as University of Electronic Science and Technology and the Southwestern University of Finance and Economics have carried out classified measures in different campuses based on the epidemic situation. For instance, students should avoid unnecessary outing and personnel who have to enter the campuses should present health code, travel code and 24-hour nucleic acid testing negative results, and online studying will be continued, according to Chengdu authorities on Tuesday.

For some students who haven't returned to schools, they will still wait and study at home online based on epidemic situation.

"We have no concerns over the epidemic prevention and control in the campus as the measures taken were strict for the sake of the students and teachers' health," a parent surnamed Ge of a senior student from Chengdu-based University of Electronic Science and Technology told the Global Times on Tuesday. Students need to take nucleic acid tests once a day and dine-in is not allowed in campus, and students now study online and express delivery can be placed outside the school gate, according to Ge.

The school also sent mooncakes to students during the Mid-Autumn Festival, which was quite thoughtful, Ge noted.

The Chinese mainland on Monday reported 188 local confirmed COVID-19 cases, of which 126 were in Sichuan and 10 in Beijing, as well as 727 local asymptomatic carriers, according to the National Health Commission on Tuesday.

The spillover risks from the latest three campus-related flare-ups in Beijing are controllable as their origins are clear, according to the authorities.

The school also opened a 24-hour psychology hotline for students and psychology teachers and medical staff were also dispatched to the quarantine sites. The school on Tuesday initiated online classes to ensure the normal study operated in an orderly manner, according to the authorities.

In Beijing University of Chemical Technology, the epidemic situation has entered a final stage with the efforts of timely epidemic control, as a total of 16,062 personnel from three campuses of the school tested negative on Monday, said the authorities on Tuesday.

The authorities will strengthen the management of epidemic prevention on campuses including arranging COVID-19 vaccination for freshmen and carefully checking the risky personnel and sites, detecting the loopholes in epidemic prevention, said Liu Xiaofeng, deputy head of the Beijing municipal disease prevention and control center, at Tuesday's press briefing.

Students and faculties on campuses should follow the epidemic prevention rules and anyone who indicates the symptoms such as fever, dry cough and fatigue should report immediately, Liu said.

Amid the epidemic prevention and control, more understanding is needed and more work could be done to improve the prevention work on campuses. A video about a security guard throwing away some delivery food outside the entrance of Wuhan University of Engineering Science went viral online, triggering a wide discussion on social media, with many netizens questioning the legality of the action. As of press time, the topic gained over 95 million clicks on Chinese twitter-like Sina Weibo.

Wuhan University of Engineering Science replied on Tuesday that the university has criticized and educated the security guard for the inappropriate move and will compensate students' loss. The school has required students to avoid unnecessary outing and encouraged students to eat within the campus, however, there are still some students who ordered delivery food which was placed outside the guard room, blocking security guards' view and smelling bad, according to the university.

During the peak hour on Monday noon, dozens of takeout staff stacked delivery food around the guard room, the security guard handled it inappropriately for failing to persuade them, according to the note released by the university. The school vowed to strengthen education and management over the securities guards and thanked the supervision from the public.

Most universities in other low-risk regions have carried out a regular epidemic prevention and control. Since September 11, all the students and faculties from Shanghai-based East China Normal University need to present a negative nucleic acid proof within 48 hours before entering the campus and those key groups need to take nucleic acid testing once a day, according to a note the university sent to the Global Times on Tuesday.

As of September 11, of the 47 universities in Northwest China's Xinjiang Uygur Autonomous Region, 45 have reopened with more than 380,000 students taking classes online, according to the local authorities. Eleven universities including Xinjiang Institute of Technology started onsite classes, and more than 20,000 students have returned to schools so far, said the authorities.

Also, in Guiyang, Guizhou University on September 9 sent a letter to all the students requiring them to follow the epidemic prevention measures amid the closed-loop management on the campus and encouraged them to be confident over the fight against the virus.