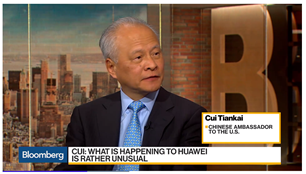 Washington (People’s Daily) – Chinese Ambassador to the US, Cui Tiankai, recently called the Trump administration measures against Huawei “unusual,” among other things.

“Can the US actually deprive people of the right to benefit from technology? I don’t think so. Does Washington really have the interests of the American people in mind? I don’t think so, either,” Cui said during an exclusive interview with Bloomberg TV.

Cui stressed for greater Sino-US cooperation, and refuted rumors of a potential China-US “technology war.” Cui questioned the US measures aimed at Huawei under the pretext of national security.

He also denied suspicions that Americans have supposedly held over the Chinese tech company’s status as a privately-owned entity, indicating there was no evidence of this as it’s been clear Huawei is a privately held company.

Cui refuted rumors that a “technological war” was imminent between the two countries and stressed that both sides should seek greater cooperation and collaboration with one another.

The term “trade war” is never positive, Cui explained, and added that trade is centered on the idea of mutual benefit and war is a form of mutual destruction.

Such opposing concepts should never be juxtaposed to create a term or describe a situation.

With trade negotiations, Cui said an agreement has yet to be reached and remains a work in progress.

Cui pointed out that in May after both sides reached an agreement and issued a joint statement, it was the US who had a change of heart, and almost overnight.

Communication should be based on mutual respect and benefit and carried out in a balanced fashion.

Cui explained the drastic reduction in China’s US investments was the result of the mercurial behavior of the Trump administration. He also added that further restrictions and barriers have dissuaded investors.

China will do whatever is necessary to protect the legitimate interests of companies like Huawei and all Chinese in the country.

“The US side can wait and see,” Cui said.

Should things continue to move in the wrong direction, then a response could be imminent. However, if both countries can find a way to work together and head in the right direction, then things would improve.

Both heads of state have provided strategic guidance for bilateral relations. And expects the two will be able to reach some sort of conclusion.

Indicating that China is still willing to deal with the Trump administration, in recent years, as Cui pointed out, some progress has been achieved.

China holds firmly that balanced dialogue, communication, and consultations are the only solution for the US and China.

“And China is still committed to that,” Cui said.