LEXINGTON, the United States, May 24 (Xinhua) -- The Fifth China-US Governors Forum held here in the U.S. state of Kentucky concluded with a consensus that cooperation is the only right choice for both China and the United States.

When Bill Lee, governor of the US state of Tennessee, found he was sitting next to Tang Liangzhi, mayor of China's Chongqing municipality during the forum, he immediately texted his surprise to his son, who once lived in Chongqing while attending university.

"Those are things that will enhance the opportunity for us to work together on things that are mutually beneficial," Lee said.

"Chongqing has a long history in its exchanges with the United States," said Tang for his part, recalling the establishment of sister cities between Chongqing and Seattle in 1983 and the performance of the US Pacific Symphony Orchestra at Chongqing Grand Theater on the eve of the Chinese New Year. 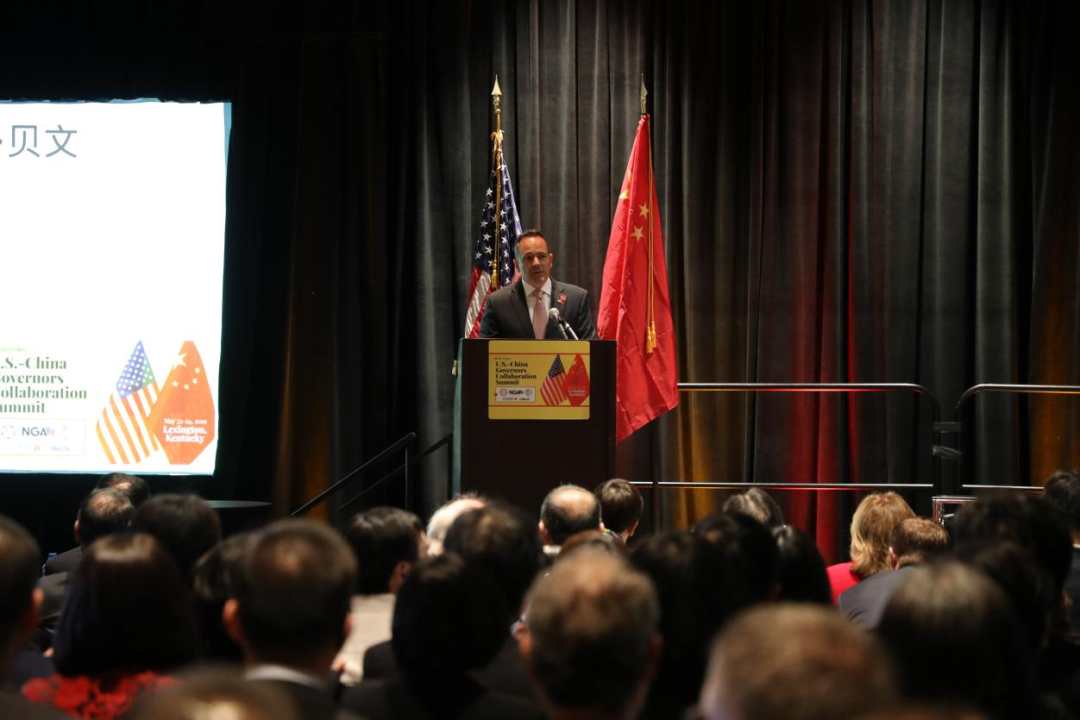 Tang also cited a famous Chinese proverb of "friends and neighbors becoming closer when they visit each other more often," while inviting American friends to visit Chongqing, have a taste of true Chinese hot spot, and feel for themselves the unique culture and charm of the municipality.

In addition to the heartfelt topic of people-to-people exchanges, economic cooperation was also highlighted during the forum.

"Economic globalization is an inevitable trend," said Tang in his presentation. "To accelerate the development of integration has become an inevitable choice in promoting common prosperity for all countries."

"China and the United States must work together to confront and defeat climate change, to alleviate poverty, to address the plague of infectious diseases and cancer, Alzheimer's, and other medical conditions, and to ensure security, denuclearization and an Internet that is safe for everyone -- businesses and individuals," said Cyrus Habib, lieutenant governor of the US state of Washington, in his presentation.

"I want to say now, not as a Washingtonian, but as an American, how important the US-China relationship is and will continue to be for the next 40 years. It's not just about making money, it's not just about creating jobs, although all of those things are important. It's about friendship through which we can solve the world's greatest problems," Habib said.

US gas supplier Air Products signed a letter of intent with Yushen Industrial Park located in Northwest China's Shaanxi Province on a comprehensive "gas island" project at the forum. Liu Guozhong, governor of Shaanxi Province, said, "better economic and trade cooperation is in line with the interests of enterprises and people of both countries."

East China's Jiangxi Province signed a Memorandum of Understanding with the US state of Kentucky on education and agriculture.

"The development of China-US relations needs the support of local governments and the people of both countries," said Wu Zhongqiong, vice governor of Jiangxi Province.

Exchanges and cooperation between Chinese provinces and US states are the cornerstone of the development of bilateral relations, and cooperation is the only way to create a win-win outlook for both, she added.

"There is so much mutual benefit between our nations, between our people," Governor of Kentucky Matt Bevin said, suggesting the issues that face the two countries will be resolved.

In his closing remarks at the forum, Bevin encouraged every person present to be an ambassador to carry the spirit of the forum back home.

He admitted there is suspicion and misunderstanding at present, but "when people talk, when people trade, when people cross cultures by going to schools in one place or the other, it goes away."