CHINA Chinese, US students tied up by cultural event ahead of Lunar New Year

Chinese, US students tied up by cultural event ahead of Lunar New Year 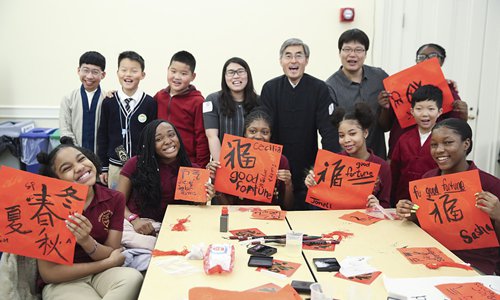 More than 100 students from China and the United States gathered Friday in New York City's Brooklyn Borough Hall, presenting their understanding of the two countries' cultures ahead of the Lunar New Year.

About 80 students from the Medgar Evers College Preparatory School in Brooklyn welcomed their guests by singing the song Jasmine Flower in Chinese, one of the most famous Chinese folk songs that is also included in Giacomo Puccini's opera Turandot. They also practiced traditional Chinese painting and calligraphy during the event which kicked off a series of activities by local communities to mark the Chinese Spring Festival which falls on Feb. 16. "As we celebrate the Lunar New Year, it's really great to have cultures coming together," said Steve Mei, director of Chinese American Planning Consul's Brooklyn Community Services. Mei said it's very beautiful to see students from the two countries interact and be involved in the arts together. The Chinese Spring Festival, also known as the Lunar New Year, is one of the most important Chinese festivals celebrated at the start of the first calendar month. In the beginning of the cultural exchange event, all students watched a cartoon video about China's 24-solar-term system, an ancient Chinese calendar with 24 periods to indicate climates and proper agricultural activities. It introduced the solar term as the fifth invention of China. The first solar term is Lichun or Spring Commencement that falls on Feb. 4 this year, marking the beginning of the spring. As there are customs and traditions associated with solar terms that people still adhere to, the calendar is still being "renewed" till today. Ge Siyu, an 11-year-old girl from Beijing, said she wants more people to know about China's 24 solar terms. In order to do that, she participated in a solar term logo design contest. Her work, inspired by famous western paintings like Vincent van Gogh's Sunflower for Autumn Commences and Jean-Francois Millet's The Gleaners for Autumnal Equinox, was on exhibition in the United Nations New York headquarters last month. Li Liyan, consul and director at Cultural Office of the Chinese Consulate General in New York, said "New York City, especially Brooklyn Borough, is the melting pot of cultures around the world ... It is important that people of all culture especially our children should take advantage of that and learn from each other." Nicole Shirley, a 13-year-old girl from Medgar Evers, translated Chinese dish names during the event. She said it was a precious opportunity to learn Chinese, a skill which could get one far in life. "You'll be able to get more jobs, because you have more communication skills. So I think that's good." She has been learning Chinese for three years at her school where 500 students, almost one third of the school's students, study Chinese as a foreign language. "I really like Chinese calligraphy. I think it's beautiful, like how the brush strokes look. That's really nice," Nicole said. Jean Adilifu, assistant principal of Medgar Evers College Preparatory School who visited China for the fifth time in November, was very happy and proud that her students could interact and speak with their Chinese peers. "Chinese is a world language," she said, adding that that was why the school had instructed all 6th-8th graders to learn Chinese. "It was the first opportunity for them to speak directly with as many students from China as we have represented today, (who are) very noteworthy as well as our students," she said Friday's event is like an immersion experience for language learning, she said. "They don't have to go to Beijing today. They come to city hall and then they can see other students. It makes their language learning more real."