More Chinese visa issuing authorities have offered facilitation to visa applicants who have been inoculated with Chinese COVID-19 vaccines, which is believed to be a vital step for China to promote vaccination certificates and resume exchanges while the country still has strict quarantine policies on international arrivals. 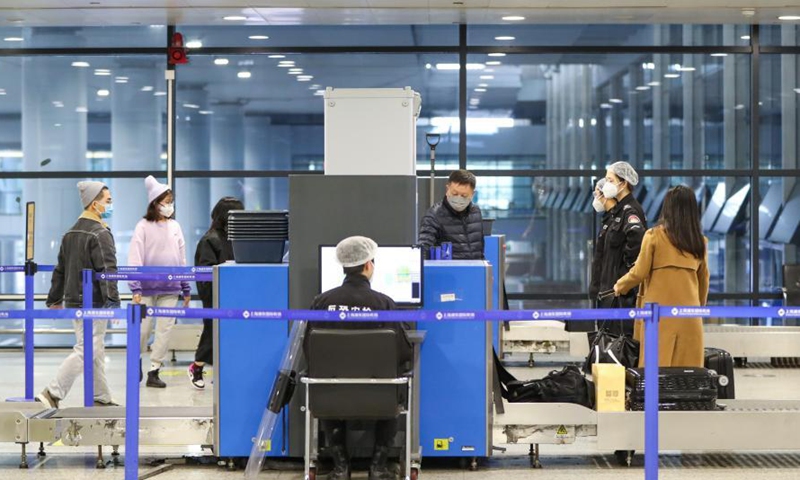 Passengers pass security checkpoint at Terminal 2 building of the Shanghai Pudong International Airport in east China's Shanghai, Nov. 24, 2020. The airport's recent daily throughput maintains at around 1,000 flights, with passengers wearing face masks and orderly moving in and out. (Xinhua/Ding Ting)

Chinese experts said that such caution from Chinese authorities is based on consideration of the risk of imported cases that could dampen its hard-earned epidemic control situation. But, given global confidence over the efficacy of Chinese vaccines and the domestic epidemic situation, experts believe that Chinese authorities have been reviewing whether to relax quarantine policies and potentially lift them in the near future.

Yang Zhanqiu, a virologist from Wuhan University, told the Global Times on Monday that he believes it is now safe for China to allow international arrivals for those who have been inoculated with Chinese vaccines and they can move freely as long as they provide vaccination certificates.

The certificate should include a positive result of an IgM antibodies test that demonstrates the person has built immunity against COVID-19, Yang said, noting that it is a convention that researchers had to accept thorough infectious disease screening and have various vaccines injected before traveling to epidemic-hit areas abroad to conduct study.

Zeng told the Global Times on Monday that in terms of science no vaccine can prevent infection or trigger antibodies 100 percent, but the benefits of accepting vaccinations largely exceeds refusing them.

Thus, in practice, specific standards like the level of antibodies can still be used as an index to assess the health condition of people while the world is exploring the way to resume exchanges, Zeng said.

Yang's assumption has been realized in an international version of China's health code released earlier this month, which includes nucleic acid test and serum antibody results, vaccine inoculation record and other information. It has an encrypted code to allow authorities to verify the holder's personal information.

Israel is also using a similar online system to resume domestic mobility. And the EU reportedly will also launch a vaccine passport program from March 17 to allow free travel within the block.

The EU's vaccine passport will only be applicable to people who accepted vaccines approved by the EU, which are produced separately by Pfizer/BioNTech, AstraZeneca, Moderna and Johnson & Johnson.

Chinese COVID-19 vaccines that have been used in some European countries such as Serbia and Hungary are not included.

Zeng said that it surely needs global cooperation to bring the world back to a normal order like one before the COVID-19 pandemic. No country or region can achieve this alone and geopolitics is inadvisable on this issue, he noted.

Various countries and regions are mulling on the vaccine passport issue, the next issue is how to promote mutual recognition between different countries.

China has been paying close attention to policies and measures taken by various countries after vaccination, and is studying the policy of using vaccine passports to address the issue of international travel for inoculated groups, Li Bin, a deputy head of China's National Health Commission, said at a press conference on Monday.

The remarks came after at least six Chinese visa issuing authorities have announced policies to streamline visa application procedures for foreigners who have been inoculated with China-produced vaccines, in an effort to resume normal personnel exchanges in the post-epidemic era.

Along with opening the borders, Zeng said he believed that the Chinese authorities must have been working on how to adjust quarantine policies, which will follow up in near future.

Chinese authorities still maintain strict quarantine policies on international arrivals to prevent imported cases, but they have been studying related issues, including quarantine policies on international arrivals and mutual vaccination recognition with other countries, an expert close to the matter told the Global Times on Monday.

The Chinese Foreign Ministry Spokesperson Zhao Lijian noted at a press conference on Monday that international arrivals to China still have to provide certificates of negative results in COVID-19 nucleic acid and IgG antibody tests and they have to obey China's anti-epidemic management measures after landing.

When asked whether it is possible for China to recognize more vaccines that have obtained pre-certification of the WHO, Zhao said that related companies can submit application with Chinese authorities, which will then make reasonable decision according to regulations.

Yellow fever is currently the only disease specified in the International Health Regulations (2005) for which countries may require proof of vaccination from travelers as a condition of entry under certain circumstances.

But concerning the issue of whether to use COVID-19 vaccination as an international travel certificate, World Health Organization (WHO) experts have expressed concerns over unfairness to people having no access to vaccines due to unbalanced supply.

Chinese health policymakers also have their concerns, including the protection rate of existing vaccines against asymptomatic infections and new mutations, and the supply of vaccines.

These concerns are reasonable in terms of cautiousness and they can be resolved by further ongoing studies and trials on COVID-19 vaccines produced by global manufacturers and the expanding production capacity.

But Yang believes, as Chinese inactivated vaccines would not lead to infections themselves, the recipients surely would not get infected nor spread the virus as long as they provide positive IgM test results. Such international arrivals can be exempted from quarantine and allowed to move freely.

The only concern is that the standards various institutes use to diagnose negative or positive results may be different. In China, most hospitals test IgM antibodies at a dilution rate of 1:50 while medical research institutes test from a lowest rate of 1:200.

The WHO can be the organizer to set specific standards for these operations and provide pre-certification to more COVID-19 vaccines to promote the international mutual recognition platform, Chinese experts said.

No major effects caused by virus mutations have been observed in the four vaccines currently approved by Chinese market regulators, Wang Junzhi, an academician and member of the national vaccine research and development specialist group said at a press conference on Monday.

According to Wang, Chinese vaccine makers are actively studying the new-generation of COVID-19 vaccines to deal with continuous mutations.

Yin Weidong, the CEO of Chinese producer Sinovac Biotech, told the Global Times earlier this month that the company's COVID-19 vaccine is still very effective against COVID-19 virus and other mutations of the novel coronavirus.

The company is analyzing data on protection rates of its COVID-19 vaccine after six months of injection as well as conducting experiments on administering the third injection to recipients to see if there is a higher protection level. Some results are expected to come out soon, according to Yin.