Chinese experts noted that China-made COVID-19 vaccines are still effective against the Lambda variant as the new strain has been detected in Japan, while China is fighting the latest sporadic outbreaks caused by the imported Delta variant. 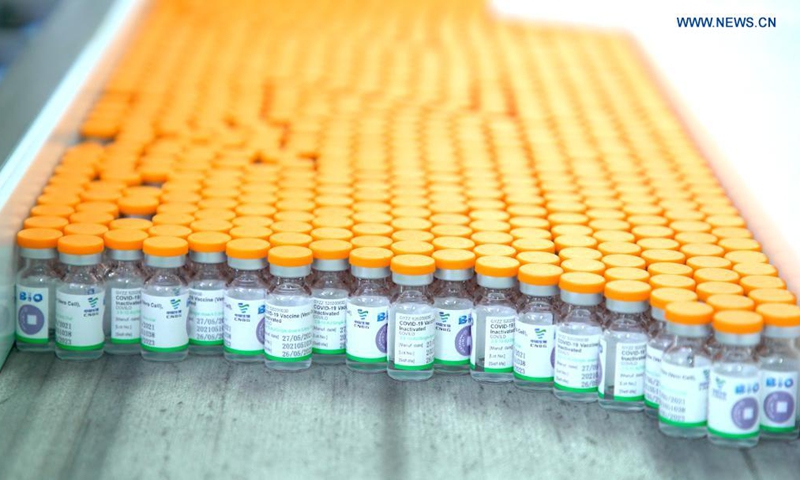 Photo taken on June 1, 2021 shows vials of the Sinopharm vaccine in Beijing, capital of China. China on Tuesday said the first batch of Chinese vaccines supplied to COVAX officially rolled off the production line, which is another important reflection of China's commitment to making its COVID-19 vaccines global public goods with concrete actions.Photo: Xinhua

They stressed physical measures to prevent imported cases from the rapidly mutating virus.

The Japanese health ministry said Friday that they had identified the Lambda variant of the novel coronavirus in the country for the first time.

Lambda, first identified in Peru in August 2020, has been spreading in South America. Compared with the conventional strain, the variant may be more infectious and may have stronger resistance to vaccines, but its details are still unknown, The Japan Times reported, citing the Japanese National Institute of Infectious Diseases.

Genomic sequencing has also identified at least 1,060 cases caused by the Lambda variant in the US so far, CNN reported, citing independent data-sharing initiative GISAID.

US experts noted that while that number is a far cry from the surge in cases caused by the Delta variant, representing about 83 percent of new cases in the US, they are watching the Lambda variant closely.

The identification of Lambda variant in Japan has caused public concerns in China, while the Delta variant is sweeping through the country with 94 domestic new cases and 31 imported cases discovered on Sunday.

Chinese residents worry that the Lambda variant would invalidate existing vaccines, and the rapidly mutating virus would drag the country into endless outbreaks that people could no longer return to normal life.

Amid public concerns, a Beijing-based expert told the Global Times on condition of anonymity on Monday that he thinks that, in a short term, the Lambda variant would not dominate Japan or ramp in the northern hemisphere as the Northern Hemisphere is currently in summer, when temperatures are not suitable for the transmission of Lambda that was first discovered in the Southern Hemisphere.

But it is uncertain whether it would replace Delta as the dominant variant in the coming winter. The expert reiterated the importance of following strict anti-epidemic measures, wearing masks and keeping social distancing to prevent the virus.

He also noted that the latest study in South American countries such as Peru and Chile have shown that COVID-19 vaccines developed by Chinese producers are still effective against the new variant.

According to GISAID, the weekly percentage of new cases caused by the Lambda variant in South America declined from 7.52 percent on June 21 to 4.9 percent on August 8.

Studies conducted in Peru have shown that the Sinopharm vaccine is at least 90 percent effective in preventing death in COVID-19 patients, the China Central Television reported on July 17.

Meanwhile, Reuters reported on August 4 that Sinovac's COVID-19 vaccine was 58.5 percent effective in preventing symptomatic illness among millions of Chileans who received it between February and July, citing Chilean health authorities.