Chinese vice premier says China, US agree not to engage in trade war 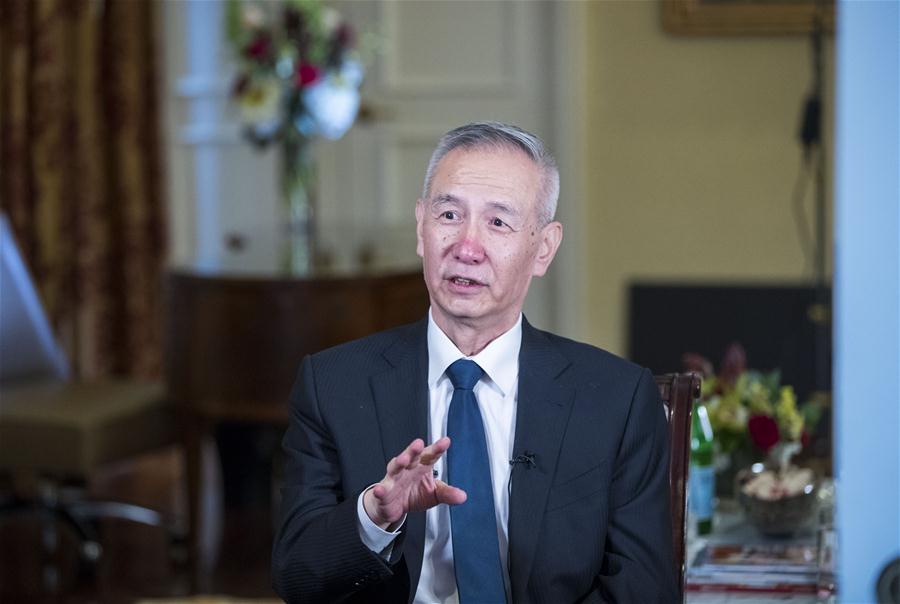 Chinese President Xi Jinping's special envoy and Vice Premier Liu He said here Saturday that China and the United States have reached consensuses on economic and trade issues, pledging not to engage in a trade war.

Liu arrived in Washington on Tuesday afternoon for economic and trade consultations with the US side at the invitation of the US government.

Liu, also a member of the Political Bureau of the Communist Party of China Central Committee and chief of the Chinese side of the China-US comprehensive economic dialogue, leads a delegation whose members come from major economic sectors of the Chinese government.

He told media in an interview on Saturday that the two sides agreed not to launch a trade war and to stop slapping tariffs against each other, which are the most remarkable fruits of the consultations.

Noting that his visit to the United States is positive, pragmatic, constructive and productive, Liu explained that the most important reason for the achievements is the important consensus reached previously by Xi and his US counterpart Donald Trump, and the fundamental cause is the needs of the two peoples and the whole world.

The two sides will enhance their trade cooperation in such areas as energy, agriculture products, health care, high-tech products and finance, Liu said.

Such cooperation is a win-win choice as it can promote the high-quality development of the Chinese economy, meet the people's needs, and contribute to the US effort to reduce its trade deficit, he added.

Meanwhile, the two countries will also strengthen their cooperation in mutual investment and intellectual property protection, Liu said, adding that it not only benefits the two nations, but also helps support the stability and prosperity of the global economy and trade.

He underlined that China, with a large middle-income population, will become the world's largest market.

The Chinese market will be highly competitive, he said, adding that nations longing for the market have to improve the competitiveness of their products and service, so as to attract the Chinese people.

China is ready to buy goods not only from the United States but also from around the world, Liu said.

The Chinese vice premier added that China welcomes all countries to attend the first China International Import Expo to be held in Shanghai in November this year.

Liu also said that China will accelerate implementation of Xi's remarks at the Boao Forum for Asia Annual Conference 2018 earlier in April, when the Chinese top leader proposed to further China's efforts to facilitate the market access, build a more attractive investment environment, strengthen intellectual property protection and increase imports from other countries.

China learns from its past 40 years of reform and opening up that the opening-up can promote reform and development, Liu said, adding that Beijing will stick to the approach in the future.

It is natural for the two countries to reach consensuses this time, Liu said.

However, it should be noted that it takes time to resolve the structural problems in the bilateral economic and trade ties, he said.

The healthy development of China-US economic and trade relations is in line with the historical trend, Liu said, adding that the two countries should properly handle their differences through dialogue and treat them calmly in the future, he said.

Top image: Chinese President Xi Jinping's special envoy and Vice Premier Liu He, also a member of the Political Bureau of the Communist Party of China Central Committee and chief of the Chinese side of the China-US comprehensive economic dialogue, receives an interview in Washington, the United States, on May 19, 2018. China and the United States issued a joint statement on Saturday on economic and trade consultations, vowing not to launch a trade war against each other. (Photo: Xinhua)