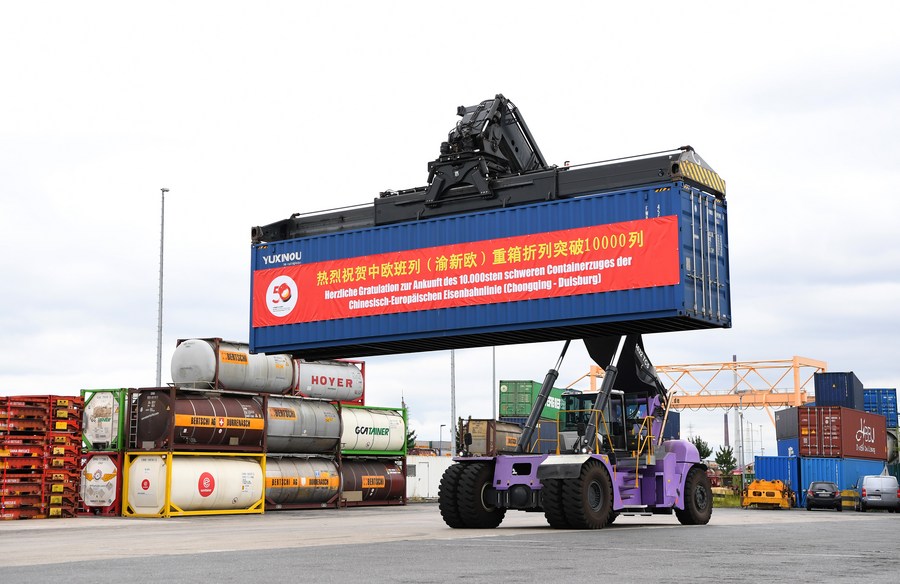 This photo taken on July 11, 2022 shows a scene from the welcome ceremony for the 10,000th trip made by China-Europe freight trains operated by the China-Europe Railway Express (Chongqing) in Duisburg, Germany. (Photo: Xinhua)

BEIJING, Dec. 15 (Xinhua) -- Chinese Vice Premier Liu He on Thursday said trade and investment cooperation is the closest bond of interests between China and the European Union (EU).

The Chinese side is willing to expand its cooperation with the EU in the fields of economy and trade, green development, digital development, finance and technology, and jointly safeguard the multilateral trading regime with the World Trade Organization (WTO) at its core, Liu said in a written speech delivered at the fifth EU-China CEO and Former Senior Officials' Dialogue.

Liu noted that both sides are actively advancing the implementation of important consensus reached at the 9th High-Level Economic and Trade Dialogue, which was successfully held in July.

"I believe that both sides have the wisdom to push forward the China-EU investment agreement, a result hard won through seven years of negotiations," Liu said.

In terms of Chinese economy, Liu said China has great confidence that the economy will turn for the better as a whole in the next year.

The country has introduced policies and is mulling new measures to improve the asset and liability situation of the real-estate sector and boost market expectation and confidence, according to Liu.

He added that China's urbanization is still on a relatively fast track for a period of time in the future, which means enough demand to underpin the stable growth of the property sector.