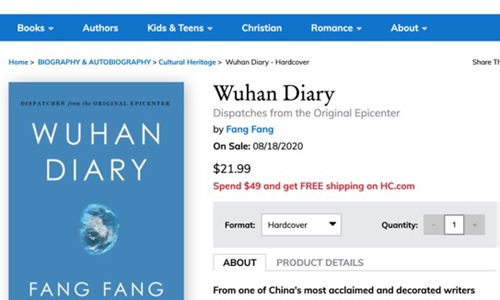 Controversial writer Fang Fang's diary, a daily account of Wuhan residents' lives under the lockdown and her own reflections on the coronavirus crisis, is now on pre-sale on Amazon and is expected to be published in the US on August 18.

The Chinese writer, whose diary on life under lockdown in Wuhan triggered polarized views in China, where some call her a truth-teller but others view her as a liar and traitor, continues to rise globally, appearing on the front pages of major newspapers in the US and even scoring publishing deals for her diaries.

However, her global rise propelled by foreign media outlets has also sounded the alarm for many in China that the writer might have become just another handy tool for the West to sabotage Chinese people's efforts to fight the COVID-19 outbreak. Many readers who were loyal fans of Fang Fang have a change of heart in the wake of the suspicious level of fanfare the West has given her.

The 208-page diary will be published by HarperCollins Publishers, the second-largest consumer book publisher in the world. Headquartered in New York, HarperCollins has publishing operations in 17 countries.

On HarperCollins' official website, it introduces Fang Fang as one of China's most acclaimed and decorated writers. It says the diary, a powerful first-person account of life in Wuhan during the COVID-19 outbreak, records the toll of this deadly calamity on families and individual lives.

In a nation where authorities use technology to closely monitor citizens and tightly control the media, writers often self-censor. Yet the stark reality of this devastating situation drives Fang Fang to courageously speak out against social injustice, corruption, abuse, and the systemic political problems which impeded the response to the epidemic, it says.

It also says Wuhan is the epicenter of the COVID-19 outbreak and Fang Fang gave her voice to the fears, frustrations, anger, and hope of millions of ordinary Chinese, reflecting on the psychological impact of forced isolation.

As Fang Fang documents the beginning of the global health crisis in real time, the introduction says she illuminates how many of the countries dealing with the novel coronavirus pandemic have repeated similar patterns and mistakes, describing the diary as a unique look at life in confinement in an "authoritarian" nation.

A German-language diary is also expected to be published by Hoffmann und Campe on June 4, according to buchhandel.de, a German book search platform. Many netizens suspected that the date of publication, which also marked a political disturbance between spring and summer in 1989, showed its ulterior motives. 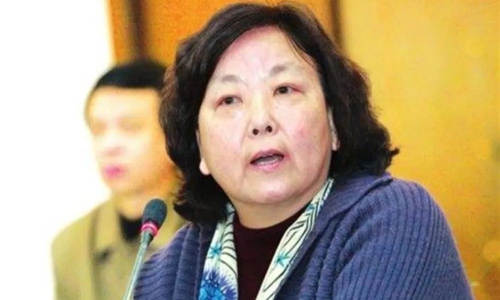 During the past three months of fighting the coronavirus outbreak, Chinese people have showed polarization in their attitudes toward this Wuhan-based author, 65, and heated debate over her 60 pieces of diaries has made a splash on social media platforms. Some people thanked her for letting them know what was really happening in Wuhan, while others accused her of creating doomsday scenarios and causing social panic with hearsay "facts."

Fang Fang and her diary have also attracted great attention from Western media. The Diplomat described her as the "conscience of Wuhan" while the Independent said her diary is what the Chinese government doesn't want people to read. The Los Angeles Times even published an article on its front page with Fang Fang's photograph, saying her online diary is a window into life and death in Wuhan.

However, to many Chinese people, it is shameful to see Fang Fang be praised by some media with double standards, especially those that have been dedicated to defaming China's efforts in combating the virus, as her diary is biased and only exposes the dark side in Wuhan while ignoring the efforts that local people made and the support extended across the nation, observers said.

The publication of her diary in English and German, as well as the introduction that seemingly attempts to deify her by portraying her as a warrior fighting against the Chinese political system, triggered alarm among Chinese people.

Observers pointed out that Fang Fang is a next target of the West following "whistleblower" doctor Li Wenliang, who were both labelled "heroes" and put on a pedestal in an attempt to sabotage Chinese people's efforts to fight the COVID-19 outbreak and start another war of public opinion to blame China for the global health crisis.

They stressed that China will reflect on its own problems but will never tolerate any interference from the outside world. Their intentions will not succeed.

On March 30, Fang Fang denied on her Sina Weibo account any knowledge of a Chinese-language book of her Wuhan Diary, saying that she did not know who wrote the book or whether it was profitable.

"I haven't published any book about the coronavirus epidemic. I did not publish this journal," she wrote.

The Global Times failed to reach Fang Fang for comment on the English diary as well as the titles the publisher gave her as of press time.

The book comes at a time when the US has been trying to shift blame over its inability to combat the outbreak onto China and has constantly slandered China's efforts in dealing with the pandemic. Zhang Yiwu, a Peking University professor, slammed Fang Fang for seeking to boost her personal reputation by exploiting Wuhan people's suffering.

Whether she intended it to be or not, the diary apparently serves as a weapon for the West to deny all the efforts and support offered by the Chinese people to Wuhan and to the world and will probably be used by the West as a piece of third-party "evidence" to claim compensation from China one day, Zhang told the Global Times.

However, he noted that Fang Fang violated the basic principle of being a writer as the diary is "biased and untruthful" and is never "a first-hand source" of the epidemic situation in Wuhan.

Like Fang Fang, Ye Qing, a deputy director of the Statistics Bureau of Central China's Hubei Province, has also been documenting the stories of Wuhan since the city was locked down on January 23. In his journal, he slammed bureaucracy and formalism after witnessing the problems in the early stages of the local government's handling of the outbreak and offered many suggestions for controlling the epidemic.

Commenting on Fang Fang's diary, Ye said she focused more on grassroots voices, but unfortunately, her material is incomplete and most of her sources came from hearsay. "All the sources in my journal were from official announcements, and I wanted to display a comprehensive image of how Wuhan people fought the virus," Ye said.

Despite having published widely in different genres and winning several literary awards, including China's most prestigious Lu Xun Literary Prize in 2010, Wang Fang - known to millions as Fang Fang, is not the most famous living writer in China.

Her early works, mostly short stories, mainly portrayed poor Wuhan people, from factory workers to middle-class intellectuals. She shot to nationwide fame after she started publishing her diary about the Wuhan lockdown on social media platforms on January 25, which garnered large numbers of fans for lifting the cover on the untold suffering during the health crisis.

However, she fell from grace in late March when many netizens and scholars began to question the authenticity of her diary. With several medical groups who came to aid Hubei gradually returning and the National Health Commission announcing that none of the more than 40,000 medics have become infected or died in nearly two months, Fang Fang wrote an entry on March 25 questioning the data. She said her friend, a doctor, told her that a 28-year-old nurse from Guangxi Zhuang Autonomous Region died on February 28 and asked people to remember her.

The diary sparked an uproar among Chinese netizens and many lashed out at the top health authority and demanded an explanation. However, it turned out that the nurse, Liang Xiaoxia, was in a coma and still receiving emergency treatment.

In another section of her diary, Fang Fang also questioned the death toll in Wuhan by claiming that a photo from her doctor friend again engulfed her with sadness, as it showed large numbers of cellphones belonging to deceased people strewn around a funeral parlor.

Many netizens were furious as Fang Fang has never delivered a sincere apology to Liang's family, or shown the photo of the cellphones in the funeral parlor. Some accused her of "eating buns with human blood."

Some readers, who were loyal fans of Fang Fang, said they felt disappointed about the diary and abandoned reading it since the end of March. "The diary is mainly composed of sad stories, playing little role in making any changes or giving any helpful advice for how to build a better city," said a reader from Hubei who now lives in Beijing.

Now some people are wondering if Fang received a certain amount of money from overseas to let the book be published for some reasons.

"We might never know but the purpose might have deviated from her original intention," the reader said.

Fang Fang recently became embroiled in another scandal after some netizens uncovered a letter in 2017 from a whistleblower who is a Ph.D in Peking University accusing Fang Fang of earning three large salaries and owning five villas. She responded to the letter as a rumor at the time.

With the questions returning on Monday, Fang Fang rebuked the whistleblower and other netizens' attacks and vowed to file a lawsuit against them.