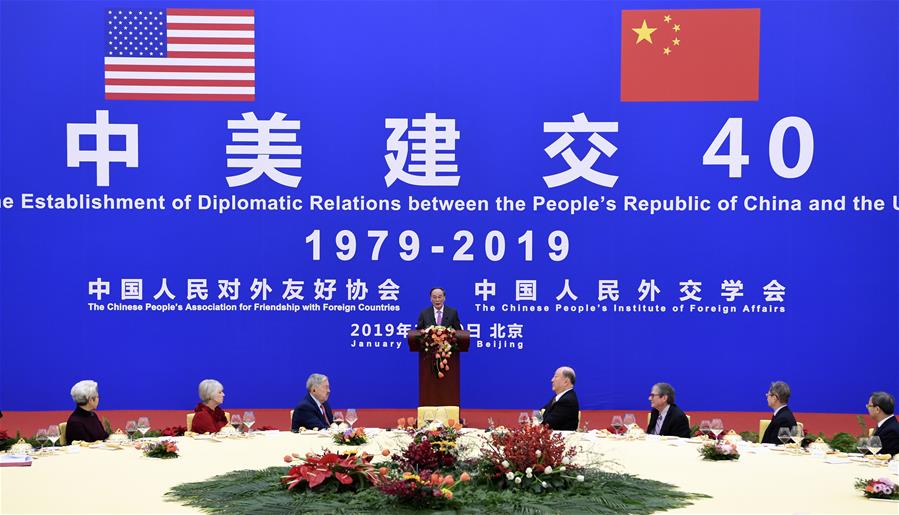 Chinese Vice President Wang Qishan addresses a reception marking the 40th anniversary of the establishment of diplomatic relations between China and the United States in the Great Hall of the People in Beijing, capital of China, Jan. 10, 2019. (Photo: Xinhua / Zhang Ling)

BEIJING, Jan. 10 (Xinhua) -- China and the United States should respect each other's sovereignty, security and development interests and properly handle and control differences through dialogue and consultations, which is key to the healthy and stable development of bilateral relations, Vice President Wang Qishan said Thursday.

The remarks came as Wang attended a reception marking the 40th anniversary of the establishment of diplomatic relations between China and the United States in the Great Hall of the People in Beijing.

Wang said 40 years ago, leaders of the two countries made a historic decision to establish diplomatic relations, in line with the fundamental interests of the two peoples and out of extraordinary strategic vision and outstanding political courage.

China-U.S. relations are one of the most important bilateral ties in the world with the greatest potential, Wang said. Over the past 40 years, their relations have forged ahead despite twists and turns, and recorded achievements unimaginable to people four decades ago. The ties have not only benefited the two peoples but also promoted world peace, stability, and prosperity.

Recently, Chinese President Xi Jinping and U.S. President Donald Trump have met each other, had a phone call, and exchanged congratulatory letters on the 40th anniversary of the establishment of diplomatic relations, pointing the way for the two sides to further promote bilateral ties, Wang said.

He called on the two sides to keep in mind the original aspirations of the establishment of diplomatic relations, and stick to the keynote of coordination, cooperation, and stability to benefit the two countries as well as the world.

Wang said the two sides should respect each other and seek common ground while shelving differences and adhere to the three joint communiques and important consensus reached by leaders of the two countries.

The two sides should keep seeking and expanding the overlapping interests, deepen and promote pragmatic cooperation to bring the two peoples a greater sense of gain, the vice president said.

He also called on the two countries to conform to the two peoples' desires to enhance exchanges and cooperation, and encourage more interactions from all circles to further consolidate the public opinion and social foundation for bilateral relations.

Noting that this year marks the 70th anniversary of the founding of the People's Republic of China, Wang said no matter how the international landscape may evolve, China will insist on its own development path and well handle its affairs so that the Chinese people can live a better life.

"China's reforms will never stop, and its door will only open even wider," Wang said, vowing that China will always be a contributor to world peace, facilitator of global development and proponent of international order.

The nations of the world including the United States stand to gain more opportunities and interests from the development and progress of China, he said.

Former U.S. President Jimmy Carter in a congratulatory letter urged builders of bilateral ties to face challenges and opportunities with vision, courage and pioneering spirit, and asked the two countries to work together to forge a future which will benefit the peoples of the two countries and all humanity.