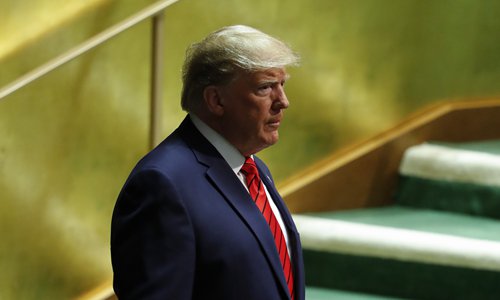 Chinese web users mocked the struggle for political power in the US as President Donald Trump was impeached by the Democrat-controlled House of Representatives on Thursday, with some saying US democracy was not attractive at all as it's damaged by endless partisan struggle and populism.

The House voted on two charges: that Trump abused his power and obstructed Congress.

Nearly all Democrats voted for the charges and every Republican against, CNN reported.

Republicans control the Senate and so it is highly unlikely he will be removed from power.

The topic of Trump's impeachment received 180 million views on China's Twitter-like Sina Weibo social media network and many web users joked about it.

"Democrats are doing this for the election next year… so obvious," posted one typical user.

Another noted "endless partisan struggle for power, low efficiency to fix problems and reforms. What a fantastic political system and you keep it, US folks, we will never buy it."

Some said they supported Trump as they believed his strategy of a trade war against China would hurt the US.

Many said they don't like the Democrats such as House Speaker Nancy Pelosi who praised the months-long turmoil in Hong Kong as "a beautiful sight,." which in fact is hurting innocent people and the city's economy.

"Go fight them, Trump! Don't let Pelosi win. To those who back the impeachment: If the Democrats win, their budget to make trouble in Hong Kong, Taiwan and Xinjiang will be increased, and you won't like it," posted another typical user.

Chinese observers noted the voting shows that impeachment is dividing and polarizing US society and political elites, rather than helping consensus.

Diao Daming, an associate professor of Renmin University of China in Beijing, said "if US people need to talk about the impeachment, they have no time to discuss about what they need or what they should do in the future, because they need to dig evidence from the past to verify whether Trump needs to be removed. This is actually a shame of the US democracy."

Populism was hurting not only the US but also other countries worldwide, and some were still suffering from unrest and violent conflicts, said Chinese experts. China should prevent it from impacting on its own development and reform, they told the Global Times on Thursday.

"Populism among the West was caused by three main reasons - the dispute on immigration, the increasing gap between rich and poor, and people's disappointment with establishment elites. At least on the Chinese mainland, we don't have this kind of challenge yet," said Song Luzheng, a political studies expert at Fudan University in Shanghai.

As China is not a country of immigrants and the campaign to eliminate poverty is narrowing the gap between rich and poor, the Communist Party of China and national leaders are highly respected and approved of by the Chinese public, he said.

As long as China makes no major mistake in governance, development and reform, populism will have no chance to trouble China, he noted.