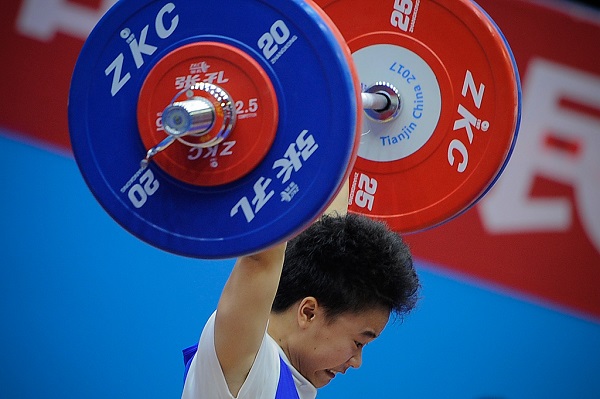 The 22-year-old sealed the snatch win by her first attempt of 90kgs before she challenged the world record of 93kg with a good lift on the second attempt of 94kg. Hou added two more kilos by making her last attempt to 96kg but was not strong enough to manage it.

As the total silver medalist of 49kg division at 2018 IWF World Championships, Hou finished the clean and jerk competition of 116kg on her second attempt, 5kg more than her first attempt of 111kg. With 210kg in total, Hou broke the world record of the overall 209kg.

"This is the best result I've ever expected. I did not think too much about breaking the records. I've done a good job today," Hou said with a big smile. "I give myself 99 points, one point less than the full mark, for I don't want be complacent. "

Zhang Guozheng, the coach of Chinese women weightlifting national team, said to Xinhua that Hou gave up the third attempt in clean and jerk because she wanted to keep her good form to the next IWF event, Asian Championships in China's Ningbo in April, saving the better show for the next lift.

In men's 61kg division, Li Fabin, the second placed lifter in total at last year's World Championships, posted 141kg in the second attempt in the snatch and secured the first place after the unsuccessful third attempt of 145kg. Li announced to retire from the competition due to his back injury in the following clean and jerk. 21-year-old Wang Hao won the third place with 286kg in total.

In men's 67kg division, Huang Minhao, silver medalist of the total at last year's World Championships, finished the snatch 148kg and ranked in the first place. Huang failed the first two attempts of 166kg in the clean and jerk, and made the good lift in the final attempt, 11kg less than the gold winner Pak Jong Ju of DPR Korea. Huang ranked third in the clean and jerk and won the silver in total.