A woman who attacked and verbally abused a stage performer at the Shanghai Disneyland on Saturday, saying he did not deserve to be Chinese, was diagnosed with acute psychosis and has been hospitalized for treatment, Shanghai police announced on Sunday. 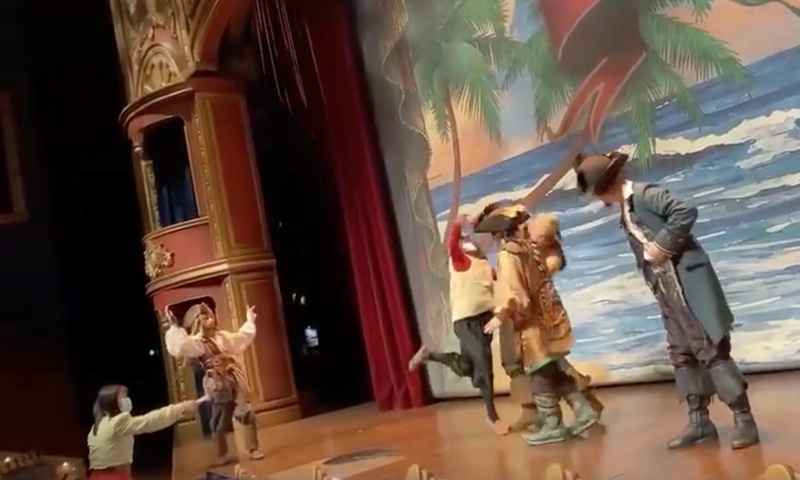 Photo: Screenshot of the video posted on Weibo

The police found the 35-year-old woman surnamed Guan had confusing thoughts and was speaking incoherently. According to her family, Guan traveled to Shanghai alone. The police announced that nobody at the resort was injured by her.

According to a post and a video that have been circulating on China's Twitter-like Sina Weibo, the incident happened during a stage performance of Pirates of the Caribbean at the Fandango Theater of the resort at around 5 pm on Saturday.

Guan unexpectedly rushed onto the stage, jumped and slapped one of the performers on the head, screaming "how can you deserve to be a Chinese," and "you American pig."

Her abnormal behavior came as a shock to both performers and audience.

After attacking the actor, Guan returned to her seat and refused to leave the theater. Resort staff were forced to cancel the performance which the audience had queued up for about one hour to watch.

According to the netizen, before the start of the play, one actor took off his trousers as part of a humorous scene where his bottom is being whipped, which led to Guan's overreaction.