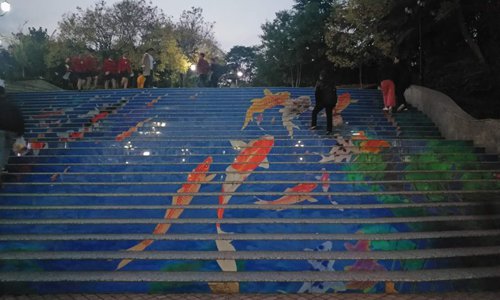 Zhang Mo, a 22-year-old student from North China's Hebei Province, has a routine of reposting pictures of singer Yang Chaoyue on social media platforms."Doing this brought me good luck," Zhang told the Global Times on Sunday. "I got easy questions in exams and was very lucky in mobile games."Yang, a singer born in 1998, became popular after participating in Produce 101, an online talent show in which Yang won third place among 101 female competitors in June.However, many people believed Yang's win was pure chance, and her dancing and singing performances were often criticized.This made Yang a symbol of good luck.Many Chinese netizens believed they could borrow Yang's luck by reposting her pictures on social media."If you repost this set of Yang Chaoyue pictures, you will be successful without any hard work," a netizen wrote on Sina Weibo, China's Twitter-like social media service.The hashtag "Yang Chaoyue" was viewed 10.2 billion times with 20.4 million discussions on the platform, with most people making good wishes."I'm not even a fan of Yang," Zhang said. "But I supported her, because I want to pay back her help in bringing me good luck."Lucky people like Yang are sometimes called "real-person koi."Traditionally, koi are kept in small pools in gardens, which people believed could improve feng shui.In the recent years, the tradition saw a comeback on Sina Weibo in digital form. "Reposting koi" has become a trend. Netizens hope doing so will bring good luck and health.Reposting koi is a way to release pressure, a Chinese cultural expert said. "But fulfilling wishes should be based on hard work."The koi crazeOn October 7, "Xinxiaodai," a 26-year-old IT engineer based in Beijing, was dubbed the "national koi" for winning an online lottery, which awarded her prizes sponsored by the Alipay mobile payment system.Among her prizes from over 150 Chinese and overseas companies was a night at Trump Tower, two round-trip tickets to Africa and an eight-day Alaska cruise."Does it mean I don't have to work the rest of my life?" she said on Sina Weibo after learning of her win. That has been reposted nearly 800,000 times, with most netizens hoping to borrow some luck from "Xinxiaodai."After the "national koi" started trending, all kinds of koi also emerged, who can enjoy the prizes provided by sponsors in a certain city or community.CCTV News reported on Saturday that there were criminals conducting telecom fraud in the name of koi as well. Jiang Haisheng, head of the Journalism and Communication Department at the Shandong University of Political Science and Law, told the Global Times that the koi craze could spread widely because Alipay has more than 1 billion users and the prizes meet the young generation's needs."The koi craze, with the power of the internet, soon became part of the 'empty-calorie' online culture," he said.Actually, before "Xinxiaodai," the reposting koi trend had been popular on the Chinese internet for years, attracting many young people to participate.One of the most popular Weibo accounts, "King of Koi," has more than 15.7 million followers. The account's most trending Weibo tweet, "Follow and repost this koi picture, something good must happen within one month," has been reposted more than 9 million times. "Whenever I see koi tweets on Weibo, I repost," Li Yujia, a 19-year-old university student from Shanghai, told the Global Times. "It won't cost much, only a click with my fingers."Li believed she is lucky for having a name similar to the word "carp" in Chinese. She told the Global Times that once she won 500 yuan ($72) in an online lottery."My classmates think I am the real-person koi. They hug me for good luck before exams," she said.Following the giant splash made by the koi reposting craze on Chinese social media, Sias International University in the city of Xinzheng in Henan Province now features a staircase painted with the lucky fish."If we walked up the steps several times, maybe the koi fish will bless us to pass every exam," a student of Sias told btime.com.

People in East Asia have a long history of keeping koi, a kind of carp with various colors.In relics unearthed in ruins from China's Yangshao culture from more than 5,000 years ago, carp patterns were found as decorations. It is believed that fish represented fertility to ancient people, allchina.cn wrote in an article posted on Baidu.Carp became a holy symbol of luck during the Tang Dynasty (618-907). The royal family's surname was Li, which sounds the same as the Chinese word for "carp." Tang people were forbidden from killing and eating carp according to the law.The fashion of worshipping carp also spread to Japan. According to news site gmw.cn, Japanese villagers began to maintain colorful carp, or koi, about 200 years ago.Nowadays, there are koi shows, in which the best koi are selected according to their colors and pattern.Isamu Hattori, chief of Japan's koi association, said that a 2-year-old koi could be sold for 1.72 million yuan, gmw.cn said.Yuan Jiandong, a Chinese company owner, was quoted by the report as saying that buying koi is a method of consumption. "Owning koi does not only prove your wealth, but also helps you forget your pressure when watching these beautiful fish.Reposting koi online is a bizarre example of Chinese people's spiritual situation during the country's transitional period, Shi Wenxue, a Beijing-based film critic, told the Global Times.Shi said that reposting koi online "is cheaper and environmentally friendly, compared with offline superstitious activities, involving over-commercialized temples, high-price incense and releasing invasive animals (for earning good fortune)."Reposting traditional or religious symbols representing good luck has been replaced by more "networked and secular" rituals, Shi said.He called Xinxiaodai a secular symbol of good luck. "She is a person, could be anyone around you, which makes people feel safe."However, Shi also noted that reposting koi is not necessarily an online superstition. "It is a custom of virtual community. It is a way to release pressure as disquieting and violent things are often shown online.""Almost everyone knows that a person could not pass exam or become lucky or healthy simply by reposting koi.  Meanwhile, almost everyone would not give up the tiny opportunity to become as lucky as Xinxiaodai."Koi, as an element of traditional culture, presents positive expectations of the future. "Reposting real-person koi represents human nature expecting good luck," Jiang noted.Reposting koi is a way of releasing pressure, regardless of whether a person reposts seriously or takes it as a joke, he said."But good wishes should be based on hard work instead of online reposts and fantasy," Jiang noted.