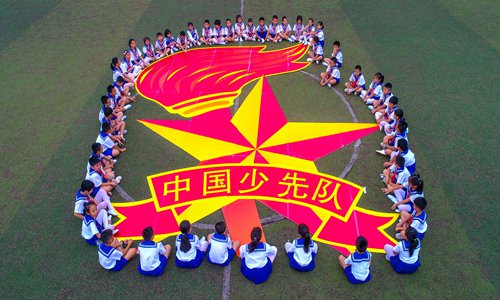 Many Chinese young pioneers on Wednesday celebrated the International Children's Day by learning about the history and spirit of their emblem "the red scarf" - honor and patriotism, as many educational activities were organized in many places across the country.

The Chinese Young Pioneers (CYP) is a national mass organization for Chinese children. As of December 31, 2021, it has a total of 110.4 million members, the Central Committee of the Communist Youth League said on Wednesday, citing data from the CYP work committee.

In Shaoxing, East China's Zhejiang Province, which is piece of "red land" and the first in the province to hold the county-level Party congress, a primary school affiliated with Shaoxing University held an ideological and political class on Wednesday about the "red scarf" culture at a local museum to celebrate Children's Day.

During the visit to the Shaoxing Red Scarf Museum, which was opened on October 13, 2004 and is famous for its collection of red scarves signed by many celebrities, teachers explained the story behind each photo to the students help them better understand the great spirit of the founding of the Communist Party of China and the CYP. Video clips were also shown to show the culture of the red scarf and the great deeds of heroic figures.

A mother from the school, surnamed Fu, told the Global Times that the school organized students to raise the national flag and play the national anthem on Children's Day, and invited representatives of the Young Pioneers to deliver a speech.

"They also showed the children old movies to see how teenagers spent their childhood in the past, my son was very shocked and impressed by the tough environment," Fu said.

In addition to Shaoxing, primary schools in Wuhan, Central China's Hubei Province, also prepared a variety of activities for local young pioneers. Zhang Yu, winner of the China Youth May Fourth Medal and a courier who had saved people in a fire in December 10, 2021, gave a special lesson for students at Tangjiadun Primary School just several days ahead of the Children's Day.

Zhang told the children his story of saving people and serving the public, and encouraged the students to be helpful, sincere and brave. "I hope that these children can cherish the time with a grateful heart, study hard, and be useful to the country, the people and the society in the future," Zhang said.

The annual Children's Day is also the time for a new batch of Young Pioneers to join the team. A total of 223 first-graders at Tangjiadun Primary School has been honored as Young Pioneers this year.

Guo Min, the mother of a Young Pioneer, told the Global Times on Wednesday that after learning about being a pioneer at school, her son shared his feelings with them at home. "He hopes that he can study hard and strive to become a scientist who will win glory for the country. We felt very relieved. This may also be the meaning of Children's Day," Guo said.

Such educational activities should not only be popular on Children's Day, but also on normal days, Guo said. "Sometimes we think that children might not understand these stories, but the truth is that they can not only understand them, but also relate to them," the mother said.