Chinese youth are defiantly embracing a "Buddha-like" mindset, with slogans such as "anything will do," "let it be" and "take life as it is" capturing media attention and stirring widespread debate on the usefulness of such thinking.

For the young, being Buddha-like means adopting a peaceful state of mind; standing aloof from worldly gain and success; doing what you like or what you think is right; and not caring about how others think about or judge you. This mindset can offer relief and a release of negative emotions built up in the face of hardship. 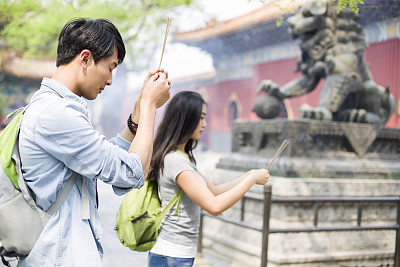 Master Xuecheng, president of the Buddhist Association of China, however, believes that this mindset may not stem from an understanding of the teachings of the dharma but instead be born of a sense of ennui, or even a kind of self-mockery in the face of an inability to influence things.

"The Buddha-like mindset has its predicaments. Escape is not the solution. One can say 'let it be' whenever one wants, but one must face reality and be a responsible person," Xuecheng says.

Yu Minhong, CEO of education company New Oriental, says that some of his young employees do nothing more than they are asked to do, and would rather earn an average salary than have a more challenging job.

"It's nothing like me when I was young. I used to work more than ten hours a day. Even now, in fact, I can retire now, but I would feel ashamed of doing nothing for myself or for society if I retired," Yu says. "Being at ease is a good thing, but being irresponsible is not."

In contrast, Zhang Yiwu, a professor of Chinese literature at Peking University, believes that the growth of this mindset is due to an increasingly affluent society freeing the young of worry about creating a better life.

Zhang says that some people simply want to avoid the stresses of a ferociously competitive modern society.

"When maintaining a decent life is easy but going upward is hard, youngsters will develop a Buddha-like mindset," Zhang says.

For some the Buddha-like youth are considered as indifferent and lacking motivation, but a number of scholars have said that it is not at odds with an enterprising spirit.

Zhang believes that if this spirit is combined with hard work it could be very powerful and worth pursuing.

"The Buddha-like mindset can help a person maintain a good state of mind and embrace alternatives instead of sticking to a narrow life path. Meanwhile, alternative life paths entail hard work and self-improvement," Zhang says.

Film maker Zheng Xiaolong believes it is important a balance is struck.

"It is understandable that some youngsters resort to a Buddha-like mindset in face of difficulties, but they cannot keep themselves detached from everything," Zheng says. "We are brought up being taught to be successful. However, I think being a kind-hearted and upright is also a good choice so long as you make a contribution to the world."