Chinese yuan climbs to four-month high, breaking 7 per US dollar

The Chinese yuan broke the key 7 against the US dollar mark in the offshore market on Tuesday, reaching its highest level in almost four months amid surging Chinese stocks and a drop in the US dollar index. 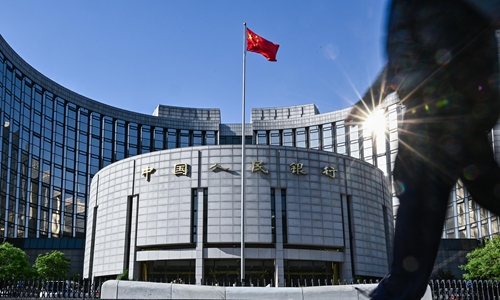 China's central bank on Monday cut benchmark lending rates by the steepest margin since August 2019 when the market-oriented loan prime rate regime was adopted. The nation is striving to repair the damage of the coronavirus outbreak,which caused GDP to contract in the first quarter. (Photo:cnsphoto)

Experts expect the rise in the currency will stimulate more buying in yuan assets and push for the internationalization of the currency.

On Tuesday morning the offshore yuan climbed over 300 points to 6.9971, the highest in almost four months. The reference rate of the yuan rose by 353 basis points to 7.031, a near three-month high. Over the first half of this year the yuan dropped 1.24 percent against the US dollar.

Liu Xuezhi, a macroeconomics expert at the Bank of Communications, told the Global Times that the yuan received a short-term boost from an influx of capital to the stock market, which witnessed a significant rally on Monday.

"With robust growth and relaxed restrictions on foreign investors, China's stock market is attracting a considerable amount of foreign capital, which needs to be converted into yuan before trading, driving up demand in the offshore market," Liu said.

The influx of foreign capital was largely driven by the inclusion of the A-share market into international indexes such as the MSCI, the lifting of the trading cap in the Hong Kong stock connect schemes with Shanghai and Shenzhen markets, as well as the abolition of investment quota restrictions for Qualified Foreign Institutional Investors (QFII).

The US dollar index, which remained below 97 on Tuesday, is weighed down by the spreading coronavirus and an underperforming economy, according to Liu.

The yuan's rise against the dollar will induce global buying of yuan-denominated assets and the push for the internationalization of the currency. Liu said investors are increasingly hopeful that yuan assets will be a safe haven from global market headwinds.

"The internationalization of the yuan is a long process, but amid global financial fluctuations, a strengthened yuan will no doubt give investors a strong incentive to hold more yuan-denominated assets for risk aversion," Liu said.

Investors have shown an increasing confidence in the yuan as China recovers from the COVID-19 crisis. The share of yuan-denominated assets has reached 2.02 percent in the central bank's foreign reserves in the first quarter, hitting a historical record, according to a survey by the International Monetary Fund (IMF).

In the second half of the year, the yuan is expected to continue to perform strongly against the US dollar, climbing to 6.8-7.0 against the greenback, said Lian Ping, chief economist at Zhixin Investment.