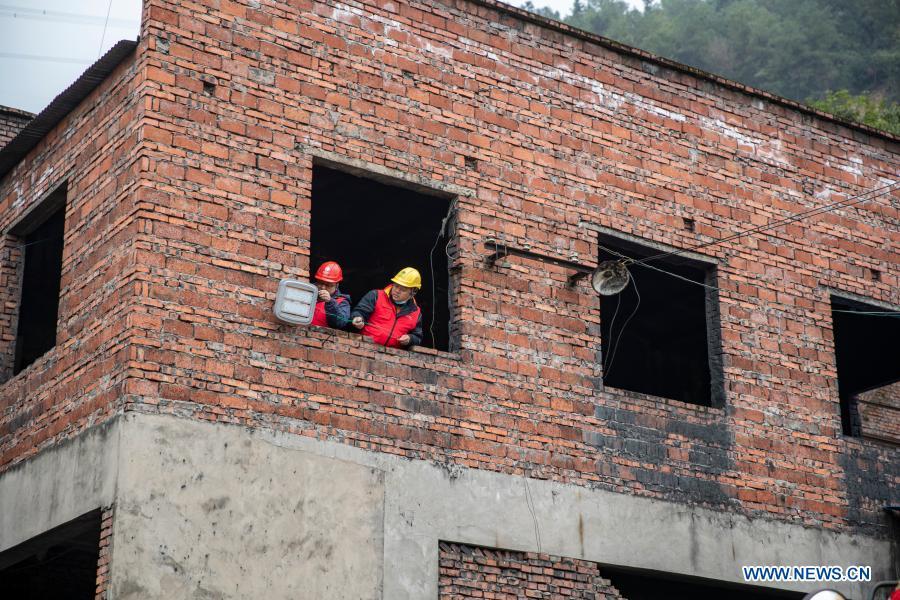 Workers check and fix the wires at the coal mine accident site in Yongchuan district of Chongqing, Southwest China, Dec 5, 2020. Eighteen miners were confirmed dead due to excessive level of carbon monoxide in a coal mine in Chongqing, local authorities said Saturday. (Photo: Xinhua)

Municipal government officials in Chongqing were warned on Sunday over the city's work safety record after the southwestern metropolis witnessed another major coal mine accident on Friday that claimed 23 lives.

Huang Yuzhi, head of the National Coal Mine Safety Administration, held talks on Sunday with municipal government officials on behalf of the Work Safety Committee of the State Council.

Asking the officials to better understand the severe situation facing coal mine safety in Chongqing, Huang, who was sent to the municipality by the Ministry of Emergency Management to guide rescue work, urged them to analyze the reasons for the frequent occurrence of accidents and to take effective measures to prevent the reoccurrence of such a tragedy.

Twenty-four people were trapped at the Diaoshuidong Coal Mine in Yongchuan district on Friday afternoon by excessive levels of carbon monoxide.

After some 30 hours of rescue work, only one person was brought out of the mine alive.

The workers had been dismantling underground equipment at the mine, which had been closed after its mining license expired in August. However, the local government said that this work was taking place without permission from the related department.

A similar incident took place on Sept 27, when excessive levels of carbon monoxide caused the deaths of 16 people at the Songzao Coal Mine in Chongqing's Qijiang district.

A miner, speaking on condition of anonymity to The Beijing News, said that people were working in two of the Diaoshuidong mine's six working areas when Friday's accident occurred.

"After the closure of the mine, there were normally very few people on duty. But recently, more people went down to dismantle the equipment," he said.

The Work Safety Committee of the State Council said that it would supervise the handling of the case in an open manner.

The cause of the accident is being further investigated.

After a recent spate of accidents, China launched a production safety inspection last month which targets the nation's coal mines.

Running from Nov 6 until the end of next year, the checks focus on mining infrastructure, risk prevention management for major disasters and emergency response and rescue capabilities.