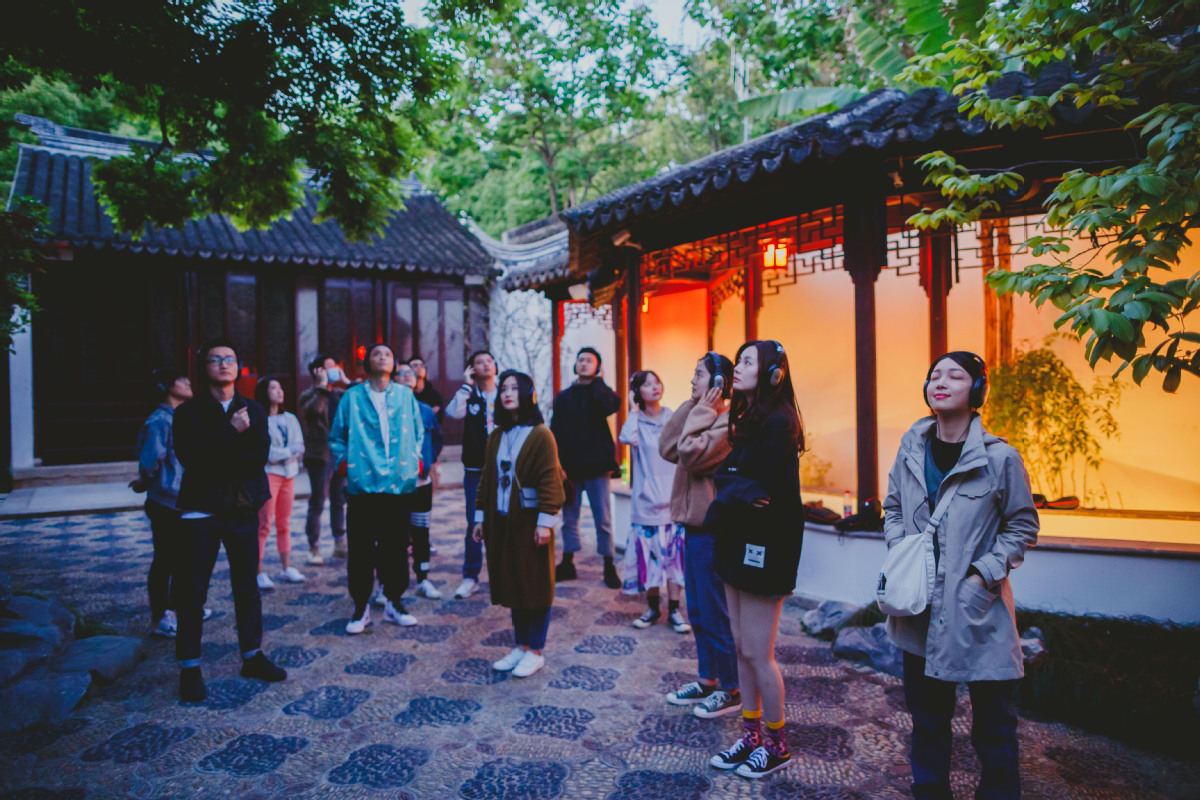 A group of performers stages an immersive play near Suzhou's Pingjiang Road. They are part of a small theater project that aims to boost the city's economy. [Photo provided to China Daily]

A warm southerly breeze carries the scent of flowers, and Suzhou in Jiangsu province is back verdant in the extreme, amid hope and anticipation as long-awaited cultural performances are finally returning.

In June, the Suzhou Kunqu Theater will host a variety of performances.

The garden version of the Kunqu Opera Peony Pavilion made a stunning appearance in the Kunqu Training Institute on April 25. Now they are already back on stage every Saturday, allowing more people to appreciate the exquisite Suzhou style of life and the opera's aesthetics.

Tang Rong, deputy dean of Suzhou Kunqu Theater, after receiving the "guidance on the resumption of work" in Suzhou's theaters and performance venues, issued by the Office of the Coronavirus Prevention and Control Headquarters in Suzhou, says the theater will launch its weekly performances in June, including the classic Kunqu Opera Fifteen Strings every Saturday.

"We look forward to meeting with citizens and tourists, using classic works to interpret Suzhou's culture, and we strive to make these small theater plays into a new landmark and cultural brand," Tang says.

To make it easier for the general public to understand these traditional dramas, Fifteen Strings is condensed from the original three hours into one.

In addition to the usual performances, the Suzhou Kunqu Theater will launch Kunqu lectures in their hall every Friday. At 7: 30 pm on June 12, at the hall, renowned actor Lyu Jia will give a lecture on female leads in Kunqu Opera.

Another show is also worthy of attention. Recently on Suzhou's Pingjiang Road, passersby could bump into a particular group of less than 30 people, all wearing headphones, performing street dance or just standing stiff with a fixated smile on their faces. They would tell you they are participating in Tune in the Sound of Pingjiang, Suzhou, an immersive situational play that takes the audience on a walk of about 6,000 steps in 100 minutes across 860 households, 10 ancient lanes and four gardens and museums.

The immersive sensual interactive show is one of the key repertoires of the city's small theater project that aims to boost its night economy. Now the local government has forged the project into a brand "Suzhou 8:30 pm", which is expected to help the economic recovery in the post-pandemic era.

Produced by the New Era group and Suzhou Culture and Art Center, the show invited writer and screenwriter Yu Rongjun to create this unique experimental exploration of art that guides the audience to start an adventure and explore the city in a new way with immersive sound effects and music that melt in the backdrop of Suzhou's historic and yet familiar neighborhood.

The show now runs regularly at 7:15 pm on Wednesday, Friday, Saturday and Sunday.

It starts from the Zhuangyuan Culture Museum, goes through Niujia Alley, Pingjiang Road and Zhongzhangjia Alley, and arrives at the Kunqu Opera Museum. From Wei Dao Taoist Temple to Daxinqiao Alley, they pass across the Couple's Garden, and finally arrive at Xiangmen City Wall.

"The show is a bold attempt to explore and export cultural exchanges. By patrolling the downtown area, the audience participates in the play that blurs the boundaries between creation, audience and our daily life. We hope that it can lead to their retrospection on the value of life," says Zhang Liang, the chief planner of the project and executive deputy general manager of the Suzhou Culture and Art Center.

According to the creation team, the whole idea came from Broken Chapter, a poem by the Chinese "crescent school" representative, poet Bian Zhilin (1910-2000). Written in October 1935, it was originally a fragment of a long poem by the poet, and later became an independent short poem that resonates among readers with the most famous verses.

"As you are enjoying the scenery on a bridge, upstairs on a tower, people are watching you.

"The bright moon adorns your window, but you adorn others' dream."