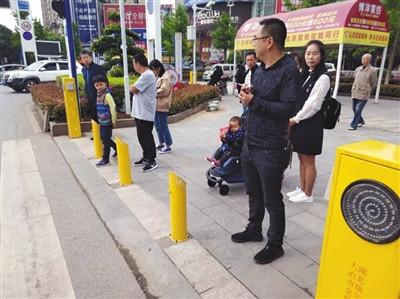 Yellow poles that can spray water are installed on two sides of a zebra crossing in Daye, Hubei Province. (Photo provided to Beijing News)

Local police have installed lines of yellow poles on two sides of a zebra crossing, which can spray water on pedestrians who ignore red lights. The system also gives the warning of "please obey traffic rules."

Devices include an image capturing and face-recognition system to record the offence and also a colorful gateway system to guide pedestrians, said a police officer surnamed Wan in charge of public relations, who added that tap water is used that will not affect public health.

Wan said the city's police spent 1.3 million yuan ($207,000) on research and development of the system in cooperation with a local company over two months.

The system is designed to stop traffic violations as Daye applies to become a "national civilized city," a city ranking honor, Wan said.

It can capture a photo of a pedestrian running a red light, collect and store facial information, and upload the information to the city's Big Data investigation center, where the rule-breaker's identity will be verified with the help of Internet searches. The person is then shamed on a giant electronic screen.

The water will make clothes wet but will not scare people or cause pollution, said the police officer, adding that there have been a drop in violations since the introduction.

The devices could be installed in more road crossings in the city. Frequent violators of traffic rules will see their social credit affected, Beijing News reported.

Chang Sha, a lawyer in Beijing, said Daye police have made an innovation to enhance traffic control but that sprayed water would cause inconvenience to pedestrians, worsen the conflict, and affect public order. Zhao Zhijing, former chairman of Beijing Urban Planning Association, also said people-oriented management should not rely on spraying water.