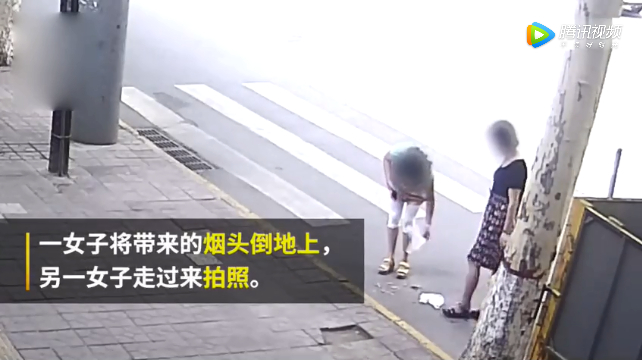 Surveillance camera footage showing two women intentionally dumping cigarette butts on a road in Xi’an, capital city of northwest China’s Shaanxi Province, incensed Chinese social media when it was revealed that the women were from the bureau of the urban management and law enforcement of Xi’an’s Lianhu District.

In the footage, the two dump cigarette butts at the roadside from two plastic bags and tread on them to make it look as if they have been there for a while. Afterwards, one takes a photo with her phone to later use as evidence.

Witnesses immediately reported the two to the local cleaner, Mr. Li, who works with his wife to keep the road clean. He was later informed that the two were inspectors from the urban management department.

“I asked for the surveillance footage from the nearby businesses and called my boss. He said the two were inspectors,” Li told the Shaanxi TV and condemned the two officers for their act.

“[Their] boss dispatched them to inspect the cleaning work because he trusts their inspection ability and attitude. How can they do that? I have been fined 200 yuan for it,” Li added

The video has gone viral and a newspaper posted an article about it with the headline: “What are the two going to do after dumping cigarette butts in the street?” The district government and three other district departments were made aware of the queries from the public and, on August 16, made a statement on Weibo in an attempt to explain the issue.

It says that the two inspectors were counting the number of the cigarette butts that they had collected and then photographed them as evidence. However, the statement points out that they broke the rules and didn't take the butts away once their work was done, which is what caused the controversy.

With regard to the complaints about being fined from Mr. Li, the district government denies any penalty or deduction was taken from his salary.

However, the response – which is almost two pages long – has not been deemed acceptable by the public, even though the government claimed that they had undergone an overall investigation. Many consider their method of counting cigarette butts went against common sense.

“I read the statement, and it's nonsense. Not a word is convincing. The Lianhu District city management officers are cheating their bosses and the public too. The cleaners have proof and have been fined but the proof has disappeared…” said Weibo user called @KaiLei.

“It’s shameless and tarnishes the city! Cleaners work from dawn to dusk, doing the dirtiest and the most taxing work, all for low pay. [The two inspectors] framed them with a dirty trick!!!” said user @Shidaiqu_SDQ. They also repeatedly questioned “Why did they photograph the butts they dumped? Why does the statement says the cleaners were never fined?”

Having faced floods of questions from the Internet, the urban management bureau of Lianhu District told Shaanxi TV that the city government had set up an ad hoc group to investigate the issue, including Mr. Li, the cleaner implicated in the issue. An officer, who wanted to remain anonymous, denied that the two inspectors framed the cleaners and stressed that they did not tread the butts but used feet to separate the butts for counting.

Xi’an City has long implemented a tough system for evaluating cleaning work, which regularly courts controversy on the Internet. According to a regulation issued in 2017, the weight of the dust on the city’s main trunks cannot exceed 10 grams per square meter, and inspectors will weigh the dust with electronic scales to confirm that it is below the limit.