CHINA City of London gets closer to China

City of London gets closer to China 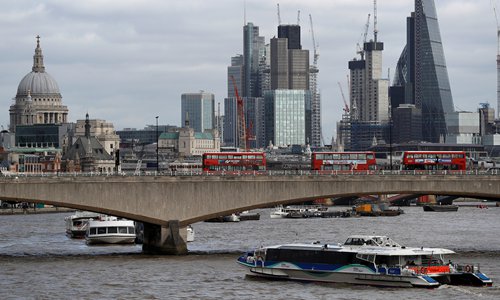 A view of the City of London,the UK Photo: VCG

The City of London Corporation, the governing body of the City of London, will launch a campaign on January 25 to celebrate the 10th anniversary of its presence in China. This move epitomizes the City of London's attempts to attract Chinese business against the backdrop of the China-proposed Belt and Road initiative. A financial hub and the second-largest yuan offshore center in the world, London is expected to make great breakthroughs in yuan business and bond connection with China in 2018.

The City of London Corporation (CLC) has announced that it will launch the "Asia Next Decade" campaign on January 25 to mark the 10th anniversary of its business operation in China and to help establish priorities in Asia for the coming decade, according to sources based in the City of London, the capital's central business hub.That is one of the latest efforts positioning the City of London closer to China, just one month after representatives at the ninth China-UK Economic and Financial Dialogue (EFD) announced that the annual Belt and Road (B&R) summit will be held in the UK in 2018. Catherine McGuinness, the policy chairwoman of the CLC, told the Global Times at a recent press briefing, "We welcome the EFD announcement that the Belt and Road summit will be held in the UK in 2018. That's something we will be working to support, making sure it's positive and successful."Sherry Madera, the government agency's special adviser for Asia, said that the UK has historical and business connections with several countries along the B&R routes. "Given the size and scale of this vision, the UK has a significant contribution to make," she said, adding that the City of London, as the world's gateway to the country's capital and a historical financial center, can offer a lot, from engineering guidance and legal support work to financing advice and risk mitigation.Madera also emphasized that green finance is applicable to the China-proposed B&R initiative. In November, the City of London started talks with multinational development banks to discuss joining the Belt and Road Investor Alliance, a platform created to encourage more green investment in the B&R initiative. Those players will work together to distinguish a new definition for "green infrastructure" and to explore how to combine green finance with B&R, ensuring the sustainability and profitability of future projects under such initiatives. RMB 2.0, bond connectionIn 2018, the UK-China RMB Internationalization Dialogue will be held in London in a bid to recognize the global use of the Chinese yuan and to promote the key role of the Chinese capital market in its currency's internationalization.The CLC launched the initiative in 2012 to support the development of London as a center for yuan business. Now, London is the world's second-largest yuan offshore center following Hong Kong.Madera also acknowledged the stickiness of the yuan in London. "It has to be RMB 2.0. We believe it's now about two-way flows, not only bringing RMB offshore and creating an offshore market, but also redeploying RMB back on shore. That topic is different. It also needs to involve different players, not only banks and institutions, such as the London Stock Exchange, the Shanghai Stock Exchange or clearing houses, but also corporate treasures. That's something quite new to the narrative and what we are looking to champion," she said.Bond connection will also be a big topic of conversation between the two countries this year, with China and the UK having already agreed to conduct research on the feasibility of the London-Shanghai bond connect scheme.Furthermore, the Shanghai Clearing House set up a branch in London in March 2017, one of the key infrastructure players supporting the bond scheme."Having them [the clearing house] in London is a great footprint for the UK to investigate in detail how the bond connect scheme is working," said Madera.The London-Shanghai stock connection scheme is modeled after a similar scheme linking Hong Kong and Shanghai, but it is faced with particular challenges including different time zones and different bond market features."A feasibility study makes a lot of sense in determining the steps to form a real connection that works," Madera said, adding that the bond market is much more diverse in London.Compared to the Hong Kong bond market, where the Bond Connect goes into the Hong Kong Stock Exchange and has a single point of contact, the bond market in London has its homes in the banks and the different platforms the bank uses.More Chinese investment   The year 2017 witnessed Chinese investors pouring money into the City of London's trophy properties. Several of the most iconic skyscrapers characterizing London's skyline are now classified as Chinese-owned.For example, in March 2017, Hong Kong real estate developer C C Land Holdings paid 1.15 billion pounds ($1.5 billion) for the famous ''Cheesegrater'' tower.Later in the year in July, Hong Kong-based LKK Health Products Group Ltd agreed to buy the famous London skyscraper known as the ''Walkie-Talkie'' for 1.28 billion pounds.In December, a group of four Hong Kong-headquartered property companies that included C C Land Holdings also agreed to buy a majority stake in a tower nicknamed "Gotham City" to be built in the City of London.McGuinness told the Global Times that although the UK's looming EU departure and the challenging negotiations that have come with it have brought lots of uncertainties to investors, the increase in Chinese investment last year proves that Chinese investors have faith in the future of the UK's financial market.Besides property investment, Chinese companies have a more important role to play in the City of London. There are more than 30 Chinese financial institutions now based in the capital's business center, including banks, securities firms, insurance companies and investment funds while several others are in the process of opening up representative offices there.McGuinness believes that these companies not only bring much-needed capital to the UK and create thousands of British jobs, but also boast expertise and unique skills, further supporting the City of London's global position.Su Yu, the Bank of China's UK chief executive, has demonstrated the significance of Chinese financial companies in London in his secondary role as the chairman of the UK-based Association of Foreign Banks, a trade body which has about 200 international banking groups as members and represents about 80% of the country's foreign banking market.