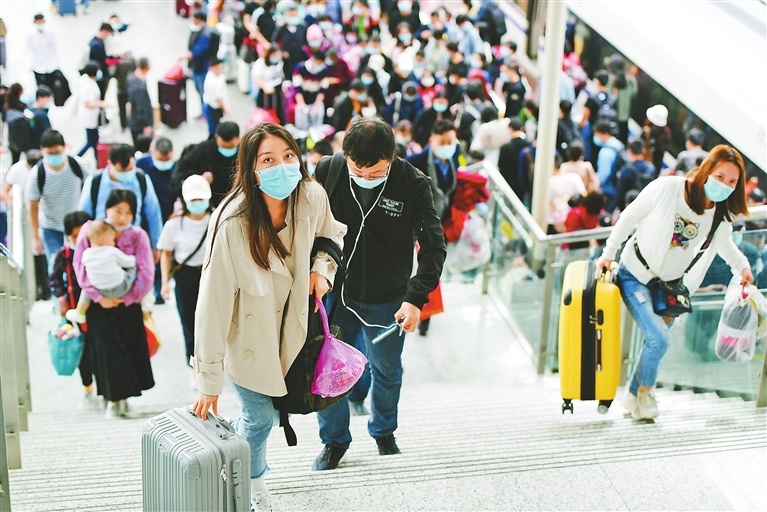 The total number of trips by train, bus, ship or plane reached 5.81 million in Shenzhen during the eight-day National Day holiday that ended Thursday, official statistics from the city’s transportation bureau showed.

The average daily passenger trip reached 727,000, up 101 percent compared to this year’s May Day holiday.

In the seven days from Oct. 1 to 7, Shenzhen North Railway Station saw a total of 2.3 million passengers, including 1.2 million arrivals, according to Xie Linke, on-duty chief of the station, during an interview Thursday.

The railway operators added six trains Wednesday and Thursday running between Shenzhen and the Chaoshan area in Guangdong Province.

Passenger turnover at the Shenzhen airport reached a peak since the COVID-19 outbreak, equal to that during this year’s Spring Festival holiday. Daily throughput reached 150,000, with more than 1,200 flights coming to and leaving the city. During the eight-day holiday, the airport handled 1.15 million passenger trips a day.

“We had to work after midnight, sometimes overnight, because there was so much luggage and some flights were delayed,” Gao Xuefeng, a ground service employee of the airport, said at an interview.

Starting from Oct. 6, about 25,000 inbound passengers a day were on flights with China Southern Airlines. The number reached a historic peak Thursday. By noon, 26,400 passengers returned by flights operated by the company, an increase of 45 percent over the same period last year.

Statistics from Shenzhen’s traffic police department showed 2.8 million vehicles left the city from Oct. 1 to 3 p.m. Thursday, an increase of 10.49 percent over the same period last year, and the inbound vehicles were 2.7 million, down by 13.98 percent.

Despite the decrease, some expressways, like Jihe Expressway and Huizhou-Yantian Expressway, saw congestion. On Thursday morning, the Longgang section of Huizhou-Yantian Expressway was jammed with lines of cars that extended about 7 kilometers. About 38,500 police officers were on duty across the city during the holiday. The number of criminal reports and traffic accidents dropped by 14 percent and 11.7 percent, respectively, compared with the same period last year. From Sept. 30 to Oct. 6, police detained 184 drivers for DUI offenses, including 81 for drunk driving. Another 323 e-bike riders were held for DUI driving.

On Oct. 4, police deployed a helicopter to carry an e-bike rider, who was injured in a collision with a van in Dapeng New Area, to a hospital in Guangming District. The 21-year-old Lin suffered damage in his right ear and a bone fracture in his right leg.