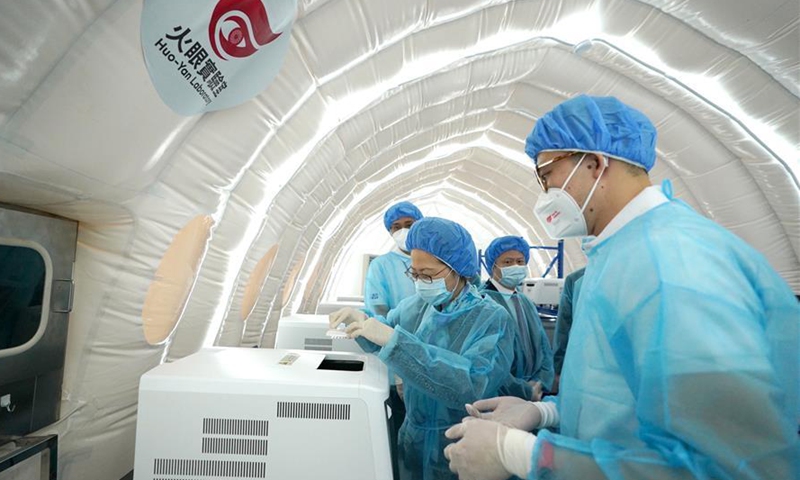 Queues at Hong Kong's nucleic acid testing centers cannot be compared to crowds gathered for elections, as size of former is strictly controlled while the election must be completed in one day and thus poses greater virus risk, Hong Kong government said late Saturday.
The nucleic acid tests, which are expected to be completed in seven to 14 days, uses an online appointment and registration system, which can effectively reduce crowd sizes and queues at testing centers, unlike the election which requires ballots to be completed in one day.
The two things cannot be compared, the SAR government said in a statement.
Some media accused Secretary for the Civil Service, Patrick Nip Tak-kuen, of not answering media questions after a broadcast show on Saturday morning about why the government decided to postpone the LegCo election while still going ahead with the citywide nucleic acid tests.
The SAR government said Nip had made his stance very clear in a previous press conference.
The Chief Executive has explained in detail that the SAR government has decided to postpone the election for one year due to the severe epidemic situation, for the sake of public safety and the protection of public health, and at the same time to ensure the election is conducted in an open and fair manner.
The COVID-19 testing will be carried out based on online registration which will largely reduce crowd gatherings and long queues. The plan aims to identify silent carriers in the community and cut off the transmission chain, and the government hopes that the public will actively participate in the drive.
Hong Kong is expected to start citywide nucleic acid testing starting from September 1.
On the first day of registration, about 220,000 citizens signed up for the testing, Hong Kong media reported.
With the support of the central government, the SAR government can greatly boost testing capability. A total of 141 community testing centers have been set up in 18 districts in Hong Kong.