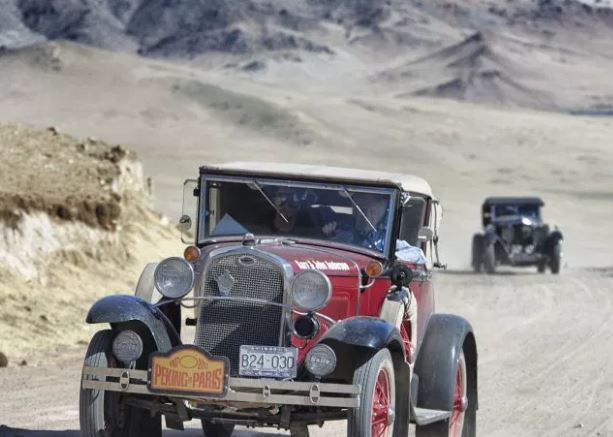 More than 200 motoring enthusiasts from across the globe went behind the wheels of their classic and vintage cars, including Bentleys, Porsches and Alfa Romeos, on Saturday in Beijing to gear up for an epic endurance drive from the Chinese capital to Paris.

The 36-day rally, considered one of the world's toughest motoring challenges, stretches about 13,000 km and covers more than 10 countries and regions through the Asian continent and on to western Europe, including the harsh deserts of the Gobi and wide expanse of Siberia, according to event organizers.

The first "Peking to Paris" motor rally was held in 1907 and took about two months. This is its seventh edition this year and retains one of its most striking characteristics -- the participants will be driving only cars manufactured before the late 1970s as they follow in the tracks of the rally pioneers.

The vehicles are set to traverse gravel, sand and stunning mountain roads and plains, with motorists getting the chance to sleep in tents under the stars on the steppes of Mongolia.

There are altogether 120 two-person teams taking on the challenge, which entry fee alone cost about $70,000. The teams roll out from the Juyongguan section of the Great Wall early Sunday and are expected to drive into Paris on July 7 through the finish line at the Place Vendome.

There will be support and logistics groups, but the participants are expected to carry out regular maintenance on their own cars and obviously, stock important spare parts since the rare cars are very different from each other. Average daily distances to be covered are about 400 km but can be as much as 650 km.

Briton Douglas McWilliams will be in his 1958 Bentley S1 model with his brother Mike McWilliams, a top-notch engineer who will lead the maintenance of their car as well as any repairs it needs on the journey. Modifications to their luxury car include strengthened suspension, a rebuilt gearbox and a new air filter for the engine.

"For us, the challenge is to take a car like this, a Bentley, across the Gobi Desert, a car that's more suited to maybe driving to the opera or going on a tour around London. So the car has been prepared quite specially for the rally. The route is very challenging, in Mongolia there are barely any roads at all," Mike told China Daily at a gathering point for the motorists in the Shangri-La Hotel, Beijing.

Other than the obvious obstacles en route, Douglas, founder and deputy chairman of the London-based Centre for Economics and Business Research consultancy, also considers the experience important because he will be able to see for himself the areas that will be covered by the China-proposed Belt and Road Initiative global infrastructure and development project.

Douglas said he will personally assess the potential of these areas when they are linked up by better transport networks and improved trade facilities. He is writing a book about the rally and the BRI called "Driving the Silk Road".

"Mike and I were brought up in Malaysia and it used to be a frequent topic of discussion amongst the expatriates, about going back to the UK overland. We've always been excited by the prospects of being able to do it," he said.

Now, with the Belt and Road Initiative and China helping to develop infrastructure connecting the East and West, Douglas said he would be able to make comparisons between the old and new trade routes.

"I'm fascinated by the Belt and Road Initiative, I think it's the most important infrastructure initiative ever. Being able to contrast the old-fashioned way of traveling across land to Europe with the newfangled ways now being created, it's such a wonderful opportunity," he said.

Californian duo Kurht Gerhardt and Derek Boycks are driving a 1967 Porsche 912 model for the trip.

"I'm just ecstatic to be here. It's a dream come true," Boycks said.

"I can't believe the enthusiasm and the passion the local people are showing to these classic cars. It's just amazing … driving over here yesterday from the storage area, everybody's waving and taking videos. It was so welcoming and everybody's been really nice. We can't wait to see more of it."