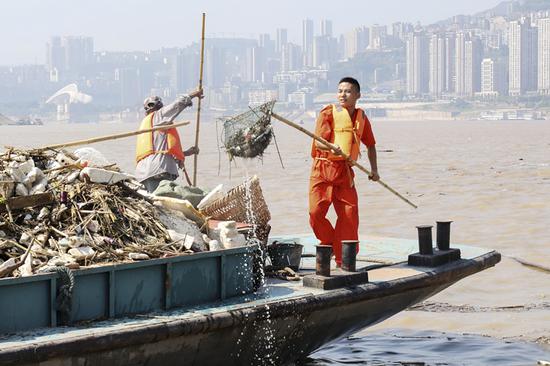 He joined the cleaning team in 2014 after graduating from Jiangsu Maritime Vocational Institute with a degree in marine engineering. Now he manages one of the mechanized cleaning boats.

"I grew up by the river and I love it very much," he said. "I want it as clean and beautiful as it was in my childhood."

Summer is the busiest time for Liu and his colleagues, as floodwaters flush detritus and plants into the 6,300-kilometer river, the third-longest river in the world and the Mother River of the Chinese people.

In grueling heat, usually over 40 C, floating rubbish must be collected quickly, otherwise it will start to stink.

About 80.3 km of the river runs through Chongqing's Wanzhou district. Authorities have divided the section into seven parts, each with at least two cleaning boats. Mechanized cleaning boats work on the main river surface around the port, while dozens of smaller boats clean the river's small branches.

This month, the team has collected over 3,500 metric tons of trash.

Wanzhou, in northeast Chongqing, is on the upper reaches of the Yangtze and Three Gorges. With 1.76 million people and a strong economy, it is a major component of the Yangtze River Economic Belt and boasts one of the 10 largest ports on the river.

Since the Three Gorges Dam was built, the river's water level rises in winter and falls in summer, opposite the natural river. As the Yangtze flows slower than before, garbage from residents along the river or littering tourists, along with the detritus and plants of seasonal storms and floods, accumulates on the surface, creating an unpleasant scene and hindering the navigation of ships. The garbage can even affect the production of electricity at the dam.

"In the first year after the dam was built, the accumulated garbage near the dam was so thick that a car could drive on it," said Chen Yu, who is in charge of river cleaning at the city's sanitation department. "It was very dangerous for boats, too."

Wanzhou started its river-cleaning project in 2003, one of the first cities along the river to tackle the problem. The team has 25 full-time cleaners, five mechanized cleaning boats and five small boats. It also hires fishermen to help clean the river during flood seasons.

The district government spends around 5 million yuan ($735,000) a year on cleanup activities.

Every month, supervisors from China Three Gorges Corp, which built and runs the dam, inspect the cleaning work of every city along the river, Chen said.

"They've also hired a full-time independent supervisor in Wanzhou to follow our daily work," he added. "They are very serious about it."

But there is still not enough help, Chen said. "We can't totally rely on machines. We need more people to collect the garbage in the river's branches. Now there are fewer fishermen than before, and it's not easy to hire extra hands."

In recent years, the total amount of garbage collected on the upper reaches of the Yangtze has been about 180,000 tons a year, according to Sun Xiaonan, director of Chongqing's research center for contaminated site remediation.

"In the past, there were piles of trash in the river and it smelled bad," said Wang Xiaoning, a resident who lives near the river. "The water is clean now, and many people like to walk here," he said.